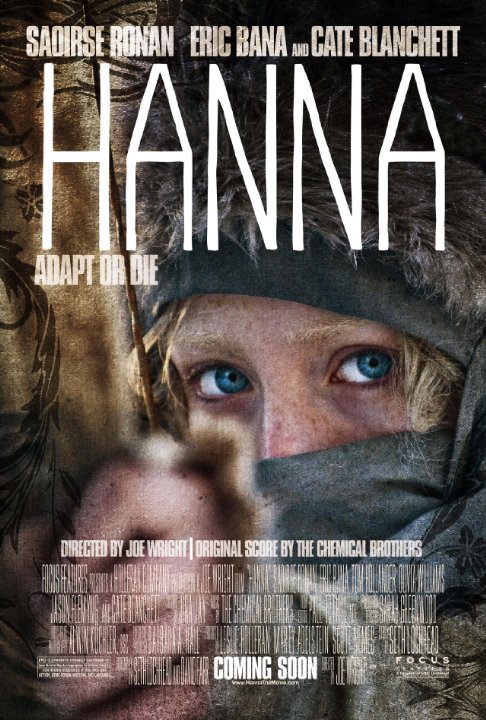 Plot: Hanna was raised by her ex-CIA father in extreme conditions and tutelage in the wilds of Finland to be the perfect assassin. On the cusp of adolescence, her father sends her on a mission across Europe, chased by a rival agent, but as she nears her target the revelations make her question her entire life. -- Chris Kavan

Despite its dire need of some polish, "Hanna" gains a special uniqueness from its recycled premise.

Hanna is a rental for me.

From watching the previews, I guess I was expecting Hanna to be kicking ass from start to finish & it would be an awesome action flick but it was a completely different movie from what I was expecting.The fight scenes that were there were awesome (Except for the 1 in the subway with Erik fighting a group of guys) but there weren't too many.Something about this movie was off for me & I can't figure out what it was.Hanna was just boring & felt like I was watching it just to say I watched it

A superb thriller with an excellent Ronan

Marissa, did she turn out as you hoped?
Marissa: "Better."

I had no idea what to expect from this movie. I'm not the type that reads opinions upfront as a guide. Usually it's the opposite of what I thought anyway.

Hanna, beautifully played by Saoirse Ronan, was trained for years by her father in Finland to perform a task which is to liquidate Marissa Wiegler. This cold lady was the one who killed her mother because she had to make sure that there were no witnesses anymore of a secret experiment with DNA. An experiment in order to grow a superior human being. A kind of super-soldier. Hana was the last witness.
Well, that's the whole story in a nutshell. I also expected a kind of "Jason Bourne"-like spy thriller with lots of action and suspense. However, it didn't work out that …

A retired spy who has trained his daughter in seclusion her entire life unleashes her upon the world to revenge herself upon the former handler who betrayed him and murdered her mother. It's the turn of teen photo love stories to be Bourne again in this girly-girl version of the action-spy movie. Hanna actually begins really strongly with some beautifully shot scenes set in an Arctic wilderness, but when Saoirse reaches the outside world it seems to become a teen travelogue featuring some awkwardly self conscious attempts at humour and a "my first kiss" soap opera. The whole tone of the film reminded me very much of a big budget kids' TV programme which does not sit well with some of the rather graphic violence that occurs at strategic intervals to remind us that we are not watching The …

Hanna (Saoirse Ronan) is a 16-year-old girl under the watchful eye of her skilled ex-CIA father Erik Heller (Eric Bana). Marissa Wiegler (Cate Blanchett), a C.I.A. officer, is searching to kill Erik. The soundtrack, direction and action were fabulous. There were instances however that are difficult to believe such as riding a speeding vehicle in motion from below, super soldier concept and a kid having good memory without proper education. Nevertheless, despite some slow scenes and lack of a challenging antagonist, performances were solid (especially the potentially gifted Ronan) and fight scenes are enough to let Hanna entertain you with themes of origin and revenge. This reviewer feels its still not at par with the likes of Nikita and Leon.

No posts have been made on this movie yet. Be the first to start talking about Hanna!