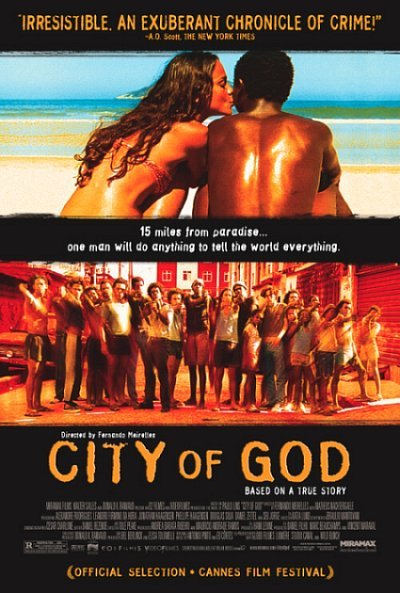 Plot: Growing up in the same town, two boys take life differently in Rio de Janeiro. One becomes a successful photography and the other a drug dealer while their lives continue to pass as they grow older.

A beautiful crime drama that examines the contrasting lives of a young man corrupted by crime and someone who becomes entangled with it while staying true to himself.

Eyeopening and surprisingly stylized, "City of God" is an engrossing crime flick with compelling and intertwined character plot lines.

Though the narrative skips around in time, the main focus is on Cabeleira who formed a gang called the Tender Trio. He and his best friend, BenÃ© (Phelipe Haagensen), become crime lords over the course of a decade. This movie has a good story and it's a cool crime film.

"City Of God" by Yojimbo

Following the lives of a group of friends and their extended circle growing up in the slums of Rio De Janeiro, this story will strike a chord with the poor and desperate around the world. Honest and hardworking Rocket slaves away for a pittance while watching brutal hoods take everything they want without conscience with the authorities caring little for this unwanted underclass so the ruthless run free to perpetuate an endless cycle of violence when desperation gives way to greed. This film is a stunning experience as you watch children play cops and robbers with real guns as only the most coldblooded and heartless survive; the cinematography is truly gorgeous, almost too much so considering the subject matter. The performances are also totally convincing all round, even to the smallest …

My second viewing of the film convinced me to rate it fairly. The journey of Rocket (BuscapÃ©) which starts from the 60âs in City of God (Cidade de Deus). He mentions the story of "Tender Trio" â Shaggy, Clipper, and Goose. Li'l Dice (Dadinho) tags along with the Tender Trio and was able to handle a gun during a robbery in a motel. Benny (BenÃ©), and Li'l Dice teamed-up in dealing marijuana. In the 70's, Liâl Dice transforms into "Li'l ZÃ©" ("ZÃ© Pequeno"), a greedy, selfless entity who enjoys power. Benny becomes the coolest hood in the city since he ensures everybody is happy and that no violence is practiced. Sandro, nicknamed Cenoura ("Carrot") is also a dealer of marijuana and is befriended by Knockout Ned because of the malicious acts of "Li'l ZÃ©" towards his …

Excellent look at life outside the U.S.

I saw this movie in Costa Rica, before it was released in the U.S. It was in Portuguese with Spanish subtitles, but I still got the gist. I bought it on DVD when it came out here so I could check out the English subtitles.

Let me start by saying that this film is based on a true story, which makes it even more interesting.

The movie is the story of a young man growing up in Rio de Janeiro, Brazil from the 1960's to the 1980's. Rocket, the main character, sees through the eyes of a participant and photographer, the escalation of violence and crime as the poorest of the third world try and find a means to survive. Drugs, gangs and violence are plentiful here, as well as touching scenes of beauty.

This movie is filmed beautifully. From the slow and easy shots in the sixties to …

No posts have been made on this movie yet. Be the first to start talking about City of God ( Cidade de Deus )!