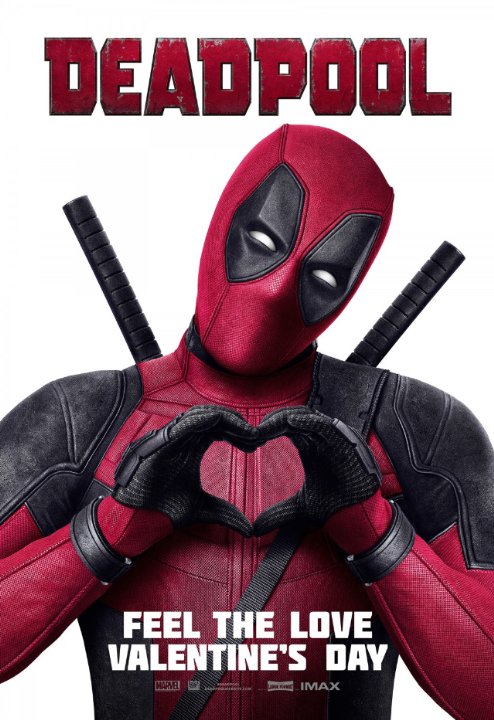 Plot: The greatest anti-hero - the Merc with a mouth - Wade Wilson was once a special forces operative but turned mercenary. After being subjected to a rogue experiment, he finds himself with accelerated healing and transforms himself into Deadpool. Armed with weapons (and a wicked sense of humor) he will stop at nothing to track down the men responsible. -- Chris Kavan

Deadpool is freaking awesome. Their's no other way to put it. It was loud, irreverent, funny, and one of the best comic book movies to be put on screen in a long time. Ryan Reynolds as the title character takes over the movie with a passion and vigor and comedic bent that onlyl he could pull off with style.

Such a boy movie. Disappointing.

A mercenary is diagnosed with terminal cancer and so undergoes a procedure performed by a shadowy organisation that not only cures but also gives him superpowers. Deadpool began as a minor character from the X-Men comics that went on to become extremely popular because of the self-effacing sense of humour and post-modernism that went on to define him and this movie version does a very good job of capturing exactly that. Essentially a superhero film that is a spoof of a superhero film, Here we have is a winning combination of tongue in cheek humour and gory yet slapstick action that reminded me somewhat of Kick Ass. Despite that, the decision to make the film an 18 certificate meant that it could stay true to the spirit of the source material and gives it a freshness that has been …

Death serious.Deadpool is absolutely to die for.

You're probably thinking, "my boyfriend said this was a superhero movie but that guy in the red suit just turned that other guy into a f*cking kebab!" Well, I may be super. But I'm no hero.

Despite the feeling of satiety when it comes to superhero movies, I still had to see this new hero from the Marvel stable. Now, you didn't need much to persuade me to watch it. Certainly not after I saw the revealed trailer last year. Immediately I was convinced that this could become a mega blockbuster. It was so brilliant and witty. Trust me, I was sick and tired of the world of The Avengers, X-Men and Super/Spiderman. Besides "Guardians of the Galaxy" and "Ant-Man", most superhero movies were just a copy from the previous episodes. Another story-line but with the same principle. "Guardians of …

A Total Blast of Unconventional Super-Heroics!

'Deadpool' is the unexpected knockout superhero hit of the year - and for good reason. This movie is just flat-out FUN from beginning to end! I can't remember a moment when I wasn't laughing. Every single joke was laugh-out-loud hilarious! That is very, very rare for someone like me to say. It is vulgar, and often juvenile, but it plays to those strengths in the best way possible. The character of Deadpool has been a comic book fan favorite for his blunt and direct nature towards comic readers. His ability to break the fourth wall comes as a natural progression to comedic spoofing of superhero tropes. He's a loon with skewed morals, a penchant for gory violence, and a secretly tortured soul. This film depicts the title character with absolute one hundred percent accuracy. We …

It was fun, I was on board with the&amp;nbsp;vibe for the most part.. and Tim Miller shows promise as a director..but that script.. stacked to the ceiling with one liners and medicore jokes. Every thing out of Ryans mouth felt forced and 'hey isn't this clever.' They could have eased up just a bit on the snidery.

it was ok, reminded me of the donkey from shrek though ( a little annoying) i liked the more serious parts though. it kind of mixed a lot into it. so it appealed to everybody, part it wa slike it&amp;nbsp; wanted to be tough and serious the other more jokey and silly.&amp;nbsp; i dont get the adult thing. it wasn't like a 18 or anything overall good movie not amazing but good. better than the others though i have not seen batman v superman yet etc and that i might like if its dark.

Considering all the records Deadpool broke, I would say the hype, for once, was indeed warranted. Plus, it was just a really fun movie. Definitely for adults, though, it earns that R rating.

super hero movies have ruined my love of movies. now search movie news its all super hero movies and star wars,have no idea anymore what new movies are out or coming out or any good as all swept by the way sidethis one has got far to much hype i,ll check it out though but looks a bit too silly for me

Out of all the superhero movies that have come out (and, let's face it, there have been a lot) - Deadpool is in a class on its own. You don't often see an R-rated superhero movie (there are exceptions - Punisher and Kick-Ass being the most notable) but this one looks damn entertaining and Ryan Reynolds is tailor-made to play the Merc with a Mouth. As much as I like to think myself a connoisseur of more serious films - damn, I'm really anticipating this one.