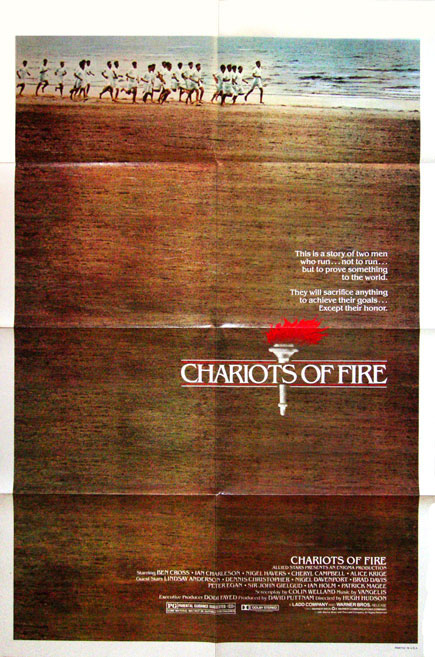 Plot: During the 1924 Olympics a Jewish boy and a Christian boy compete heavily.

An insufferably slow movie about fast people, "Chariots of Fire" collapses under its heavy-handed religious themes, baggy plot, and characters who never come to life.

One of my all-time favorite sports films. This is a film that it is impossible not to cheer at - a portrait of an athlete that transcends the sports and focuses, instead, on the human relationships surrounding the Olympic event. Of course, the triumphant final moments rank up there, for me, with films like Rocky and Hoosiers in showing exciting final sporting sequences. The theme, of course, is inimitable and perfectly fits the tone of the film.

The story revolves around Eric Liddell (Ian Charleson) and Harold Abrahams (Ben Cross), who are running for a cause. Such as simplistic plot should not have exceeded more than an hour and 30 minutes. So many background figures and slow motion sequences slows the movie down. The training, physic and atmosphere of the Olympics were exhibited realistically. The score obviously plays a huge part to make the film engaging. Definitely one of the most memorable scores in film history. In terms of entertainment value, this critic widely prefers Rocky with its detailed character development, inspiring soundtrack and likeable supporting cast. This picture did alright with the cast, if only they were more memorable. The director could have emphasized the two leads instead of focusing on …

No posts have been made on this movie yet. Be the first to start talking about Chariots of Fire!