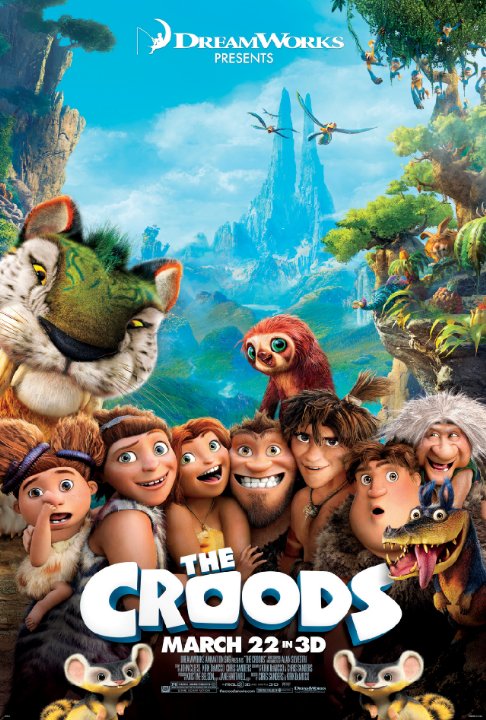 Plot: After their cave is unceremoniously destroyed, the world's first prehistoric family goes on a journey to find a new home and discovers a whole new world of fantastical creatures and wonders. -- Chris Kavan

Not as memorable as some of Dreamworks other features.

"You shall never not fear." Thrilling animated movie! However, needs to be sanitized because of some brutal images. Finally we understand why fear. I thought it would be closer to reality. ***SPOILER ALERT*** Dad's sacrifice saved the movie. Emma Stone's voice is very recognizable, just saying.

this movie was like ice age but with heart.

Another Product Hot off the Assembly Line

While companies like Pixar (and to a lesser extent, Disney) continue to innovate and take risks, Dreamworks is still using their same formula. The formula, of course, is use themes from better films, recycle all the same gags from previous efforts, splash some colorful visuals on it, and it if it does well, plan a sequel and a television series. Examples of this formula: Madagascar, Kung Fu Panda, How to Train Your Dragon and Shrek (though in it's defense, Shrek never got a TV series). Now, we can add The Croods to Dreamwork's extensive list of products.

The Croods is about a family of cavemen that are used to living in their protected cave. Eep, the oldest daughter of the family, wishes to explore the outside world, but her father, Grug, forbids it. But the entire family is …

Nicolas Cage and Ryan Reynolds needed this push in their life. Chris Sanders (who created a wonderful How to train your dragon) comes back with help from Kirk DeMicco in The Croods. A silly, rusty and superlative fun with right content and emotional punch to keep the interest on, for the film. Sandersâs visual world is dangerous, as he is depicting the end of the world when cave men dwelled. Here is Grug (Finally Cage in a brilliant voice over) and his family. His daughter Eep (charming voice over by Stone) is always daring to take adventurous steps. This leads to a conflict between father-daughter and Eep meets a guy (voice over excellent from Ryan Reynolds) slightly more mature than these cave men, but has a brain to think of an idea. They take his help, despite Grug opposing him as …

I'm conflicted over The Croods. While I though the design and animation was quite well done - the story and characters just didn't connect with me. What you have is really a basic family adventure mixed with the requisite comedy/drama quotient and wrapped up in a caveman skin. While it isn't done badly - it's pretty standard in my eyes.

Early on we meet our modern caveman family - father Grug (Nicolas Cage), mother Ugga (Catherine Keener), daughter Eep (Emma Stone), son Thunk (Clark Duke), Gran (Cloris Leachman) and the animalistic toddler Sandy. Grug is overprotective to the point where anything involving leaving their cave is forbidden - his nightly bedtime stories always end in death - usually due to "curiosity". But his daughter Eep is the polar opposite - she just wants to live …

Even though Oz the Great and Powerful was PG - it didn't attract as big a family audience as expected. The Croods, then, really has no competition for this demographic and should do well (if only because it's the only option at this point).I have to say, though, that the more previews I've seen, I'm warming up to the film as a whole (and if Nicolas Cage punches a bear - it will be period-specific and not some poor girl in a suit!). I'll be interested to see where it winds up this weekend.