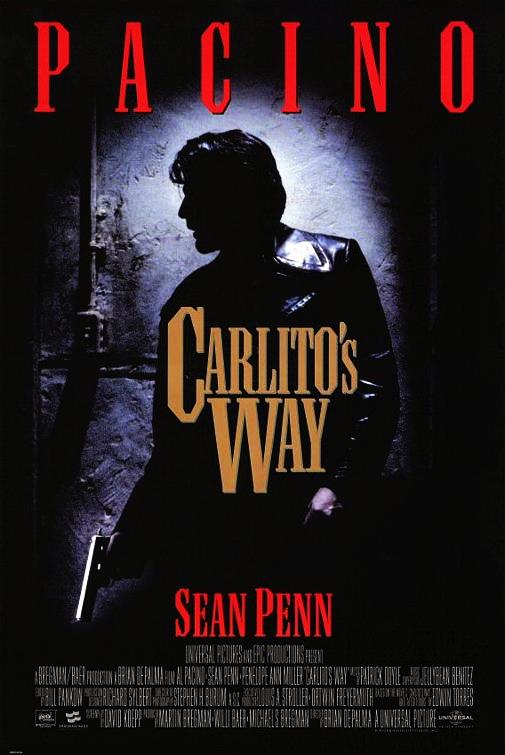 Plot: A gangster is released from prison as he pledges to stay out of trouble in New York City.

Al Pacino and Brian De Palma reunite for this nostalgic crime drama about an ex con named Carlito Brigante (Pacino) and his wishes aiming to go straight. Only for his associates and fate to take a dark path. It's an interesting set up and Pacino's experienced yet regretful turn as Brigante is quietly intense just as Tony Montana was loud and animated. Penelope Ann Miller is lovely as his stripper girlfriend while Sean Penn is amusing to watch as his cowardly cocaine addicted lawyer.

Criminal reforming himself after prison finds it hard when those from his past are still his influence. Great cast of actors really sell this decent crime laden story of false hopes and redemption. Carlito is a conflicted character. His wants are hard to attain in the environment he returns to. Sean Penn gives probably the best performance. A few scenes of bloodshed show De Palma's trademarks, but none can match the tense, elongated chase in the finale. Definitely the highlight of the film.

Pacino is gangster that just got out of jail. He sees that gangster way of life is not good and wants to quit. However that want be so easy and that is because he was huge drug dealer and probably killed many. - Good plot. However i wasnt that convinced by Carlito. Too much for gangster i think. But this will take only half star from movie because: Its extremly interesting, intense, well shot, and never boring. I also liked how it reminded me of film noir, with narrative style, that worked really well. And Pacino is good. Its not 4 star gangster masterpiece because of reason i stated up there and possibly because screenplay could be kind of more epic, like goodfellas or scarface. But very good.

A Puerto Rican drug dealer is released from prison with the full intention of going straight, but circumstances make it increasingly difficult. Carlito's Way feels like the other side of the coin to De Palma's earlier collaboration with Pacino, Scarface. In this film the protagonist is an essentially good man doing his best to stay out of trouble, something made impossible by crooked, jewfro-ed best friend Sean Penn. As is always the case with De Palma, subtlety is thrown straight out of the window and his comic strip direction means it's hardly the height of sophistication. It is however always entertaining thanks to enjoyable turns from the double act of Pacino and Penn and the lurid environment of 70s New York makes a colourful backdrop to the slapstick violence. On the downside, …

Brian DePalma and Al Pacino team up once again after Scarface, and combine to make what I think is a better movie in Carlito's Way. Anyway, Pacino was terrific as Carlito Brigante, an ex-dealer/ex-criminal type who's trying to make amends on the outside after he leaves prison life after a few years. Carlito's lawyer, who's brilliantly played by Sean Penn, is about as crooked as a dog's back leg, but has Carlito's loyalty because he got him out of jail when no one else seemed to care about him. Add a cool 1975 soundtrack and atmosphere, and we have the ingredients of a finely tuned picture which even involves a past love of Carlito's, played by Penelope Ann Miller. Even though he's still constantly surrounded by drug dealers and thugs, he tries his best to go straight and escape his …

"Carlito Brigante" (Al Pacino) was just saved from a 30 year prison sentence when it is learned that evidence was illegally collected. Now, "Brigante" is determined to stay out of prison by trying to go straight -- but things keep bringing him back to his old life.

This is a pretty good telling of a man who tries to turn his life around. He reconnects with an old love (Penelope Ann Miller), and takes over a night club to try to make money legitimately. However, the D.A.'s office doesn't believe that he is trying to go straight, and tries to catch him in illegal dealings -- even convincing a friend or two to wear a wire.

Another problem is an up-and-coming punk named "Benny Blanco (aka Benny Blanco from the Bronx)", who is determined to take over "Brigante's" business by any means …

No posts have been made on this movie yet. Be the first to start talking about Carlito's Way!