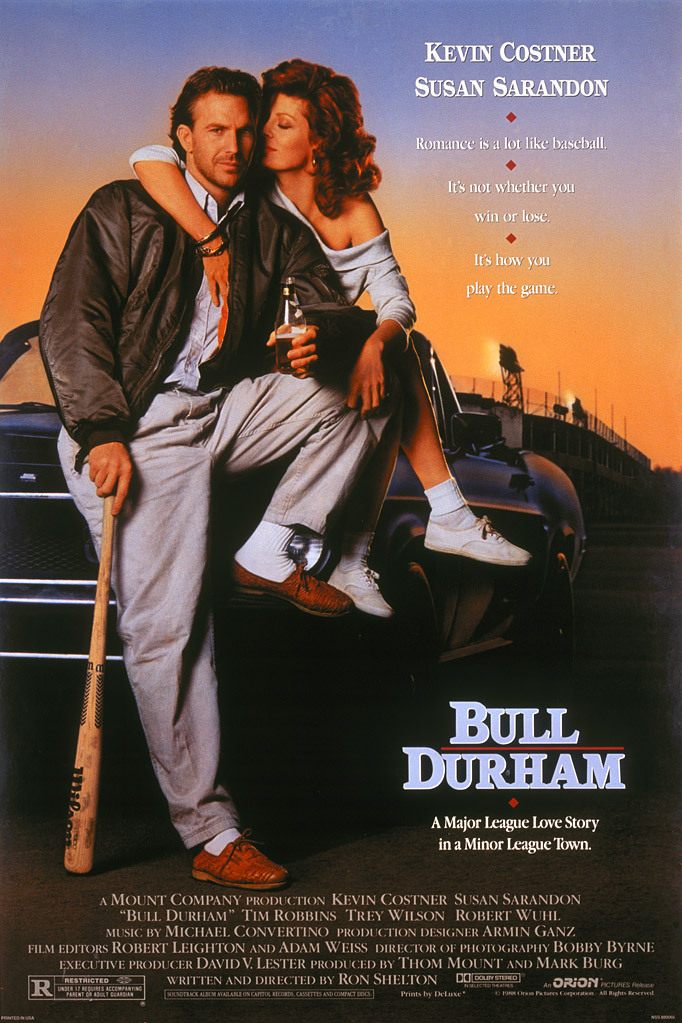 Plot: A catcher and a pitcher are up and coming minor leaguers when they both seem to fall for the same fan. A movie about baseball.

With a smart script and fine performances, it's easy to see where this sports comedy earns its status as a classic.

Good, funny sports comedy. Liked this more than I thought I would.

A sports comedy that isn't laugh out loud funny but succeeds mostly because of its slightly goofy and lovable characters. Costner and Robbins have an interesting chemistry that drives most of the film's funniest scenes. I didn't really love Susan Sarandon's character that much and found some of the romantic subtext a little cheesy.

"Crash" Davis (Costner) is a wise veteran helping out a wild cocky Ebby LaLoosh (Robbins). A peculiar girl named Annie (Sarandon) gets to know the two men who plays for the Durham Bulls. Simple premise yet the screenplay and soundtrack were wonderful. Chemistry between Robbins and Costner good, though Crash seems to be like the Yoda of baseball. Certain scenes kind of dragged. Had some steamy sex scenes and some characters were too weird ala members of The Cleveland Indians from a comedy flick. Best lines: Annie - "The world is made for people who aren't cursed with self awareness." Crash - "Why do you get to choose? I mean, why don't I get to choose, why doesn't he get to choose?" Bull Durham is a baseball romantic drama with touches of slight humor and symbolism's of the game and …

Strikes out on laughs

In Durham, North Carolina, the minor league baseball team, the Durham Bulls, are having a horrible season. However, things may be looking up for the team as they have signed a promising rookie pitcher, "Ebby Calvin LaLoosh (Tim Robbins).

The team hires a catcher by the name of "Crash Davis" (Kevin Costner), who is nearing the end of his professional baseball career in the minors in a career that included three weeks in the major leagues (or "the show", as it is known in the minors), to teach the rookie. "LaLoosh" also gets some coaching by well-known groupie, "Annie Savoy" (Susan Sarandon), who hooks up with a player for the season, which many consider a good thing due to her unusual coaching ways in the sport she legitimately loves.

Although "Annie" has picked "LaLoosh", whom she …

No posts have been made on this movie yet. Be the first to start talking about Bull Durham!