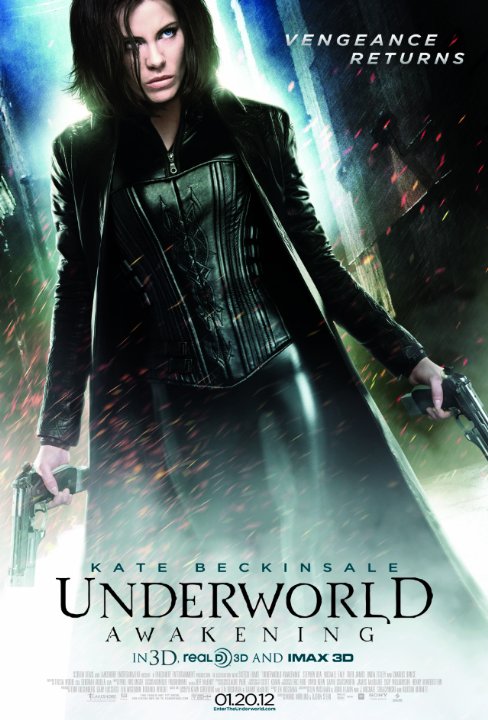 Plot: The vampire Selene has escaped imprisonment only to face a world where both vampires and lycans face extinction at the hands of man, who has discovered their secret existence. -- Chris Kavan

The vampire Selene has escaped imprisonment only to face a world where both vampires and lycans face extinction at the hands of man, who has discovered their secret existence. Did you know that underword was going to be called underworld a new dawn. underworld 4: awakeing . This movie is just terrible awful writing, weak story and this is not the best but the worst

Not that bad - the return of Kate Beckinsale (in the smokin' hot bodysuit) is welcome and the story itself is interesting (certainly better than the rather drab Rise of the Lycans). Though it's still mostly action and only occasionally good CGI, if you're a fan of this series - or bloody action - it's worth it to check out.

The action is good, but..... Still a followup and not that surprising. Even at the end the makers keep the plot open for number five. If possible I like vampires, and the movies they play in but now Underworld gets disapoinedly predictable.

The vampire and Lycan races are discovered by the humans who retaliate by creating a paramilitary force to root out and exterminate them both, leading to Selene's capture and cryogenic freezing for 12 years. In a massive departure from the previous films, here we have Kate Beckinsale in a patent leather catsuit, corset and duster coat leaping around shooting rather unconvincing CGI monsters through a blue filter. There's nothing intrinsically wrong with that of course, but let's face it, the Underworld franchise gives its audience little more than a case of deja vu every time it rears its fanged head, and the films are ever more inoffensive yet forgettable for pretty much the same reasons. There's plenty of action, the cast are nice to look at and at a mercifully brief 75 minutes, it …

Underworld Awakening 3 out of 4 stars

The latest edition to the Underworld series doesn't disappoint. It isn't as fresh as the first film, but that is to be expected beings this is the fourth film in the series. The continued use of puppets instead of CG to depict the Lycans is one of the things which draw me to this specific series. The use of CG is over done in many instances, for example in the original Star Wars films compared to the prequel trilogy. The acting and action continues to be excellent in this film, and the introduction of new characters is done in a way which makes sense to the plot, which is important. All of the actors are the same as well, in my opinion nothing is more annoying that switching actors in a film series (i.e. the colonel in Iron Man, and Rachel in the Dark Knight trilogy). The only part …

fun and exciting to watch!

Kate is back sexier, angrier, and more powerful than ever!

The movie starts out with a quick recap of the first two movies then continues to Selene waking up seeking answers in her sleek black latex outfit. The audience learns that she's been experimented on for the past twelve years by scientist Dr. Jacob Lane (Stephen Rea) who says he is looking for a cure for both Vampire and Lycan afflictions. She is Specimen Two and she assumes Specimen One is her beloved Michael. Selene soon discovers that the humans are on a mission to destroy them but Selene is a Death Dealer and her foes should remember that at all times.

I don't want to give away any of the film's "secrets" but suffice to say, she's extremely p*ssed and NO ONE will stand in her way. At barely 90 minutes Underworld: …

No posts have been made on this movie yet. Be the first to start talking about Underworld Awakening!