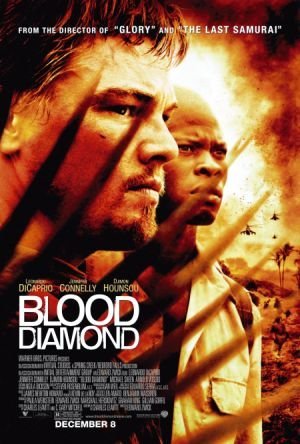 Plot: A priceless diamond is discovered by a fisherman. A smuggling thief who only looks after himself over hears a story about the greatest diamond. Both men race to find it, but for different reasons.

It acknowledges the atrocities related to blood diamonds, but adds very little to the discussion of the subject, opting for B-movie action scenes instead.

The story is about a priceless diamond is discovered by a fisherman. A smuggling thief who only looks after himself over hears a story about the greatest diamond. Both men race to find it, but for different reasons. Leonardo DiCaprio should have won a Oscar for his acting in this movie just a powerful and heartbreaking acting in this movie that no words can say.

This movie is gripping and hard-hitting throughout. I great look into a terrible real-world situation. It is a ride that will make you hurt. I always hate to say it but..... Always expect a great movie with Leo DiCaprio in it. This movie really drives home the story it is trying to reveal. This will make you think twice about where you get your diamonds and other resources from.

A fisherman caught up in the civil war of Sierra Leone reluctanctly teams up with an amoral smuggler to retrieve a precious stone in the hope that it will secure freedom for his family. Edward Zwick has made a career of making worthy adventure-with-a-message movies which have tended to be a cut above the usual Hollwood action blockbuster fodder, and Blood Diamond is very much in this tradition. Rather than a deeply insightful analysis of the political situation, it is more of a straight action adventure that uses the conflict as a colourful backdrop to the story. Not that it doesn't have any points to make; it highlights the cynical complicity of the West in the conflict diamond trade, and the "politics" of the warring factions whose ideologies extend no further than greedy and corrupt …

This movie introduced me to this versatile actor named DJIMON HOUNSOU (acted as SOLOMON VANDY in movie). Very impressive. But he was getting close to stealing the spotlight from LEONARDO DICAPRIO (DANNY ARCHER in movie). Not that DICAPRIO failed miserably. It's not that. I believe it was a combination of the character's significance in the whole story and just simple pure good acting. From SOLOMON's standpoint, it was all about the search for his son. From ARCHER's standpoint, all that mattered was finding the diamond.
ARCHER, however, had a change of heart. He found out in the end that he was pursuing the wrong thing. He found love instead. And true friendship. To him they were more brilliant and precious than any gem of this earth.

A lot of people hyped this film up for me so I had a lot of expectations prior to seeing it. I am happy to report that it did live up to my expectations. Even though I think it was a bit too long, the story kept me interested due to its moving scenes and the characters' interactions. Leonardo DiCaprio and Djimon Hounsou shine as they portrayed two characters with very different incentives and later on developed an unlikely bond. The film also made me see diamonds in a different way. Prior to purchasing one, I'll definitely think twice whether to do it or not (most likely my decision will be the latter after seeing this movie). This is the kind of cinematic experience that I will remember for a long time, like "Hotel Rwanda," because of the violence and the government's role in people's …

No posts have been made on this movie yet. Be the first to start talking about Blood Diamond!