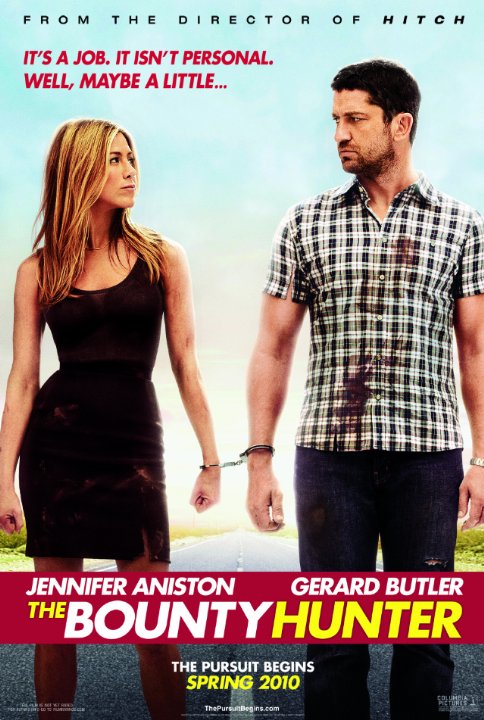 Plot: A bounty hunter finds he next assignment is for his ex-wife, a journalist working on a murder cover-up. After nabbing her, the bitter couple find themselves on the run in Las Vegas. -- Chris Kavan

Milo Boyd (Gerald Butler) is a former cop turned bounty hunter who gets his dream job when he is assigned to track down his bail-jumping ex-wife, reporter Nicole Hurly. Obviously it was never going to be as simple as that for Nichole is working on a big story involving a murder and she is not about to let her ex get the best of her. The two continually one-up each other - until they find themselves on the run for their lives. It has funny moments, especially when we watch two main characters fighting. If you're a guy, Jennifer Aniston is fun to look at and Gerard Butler makes for good eye candy for the ladies.

The Bounty Hunter was better then I was expecting it to be but still it was just alright, Nothing special at all

I've seen parts of this movie like 5 times, never watched from beginning to end, I don't think I'm going to even try anymore

You know when you decide to go with the fat-free desert topping â or the âliteâ salad dressing; then you find the taste just isnât quite there? Well, âThe Bounty Hunterâ is kind of like that. I donât want to go on record as saying itâs a bad movie, because it isnât. It just doesnât rise to anything remotely resembling above average.

Directed by Andy Tennant (âFools Goldâ, âHitchâ, and âSweet Home Alabamaâ), this filmâs main plot is about a bounty hunter who is tasked with brining in his ex-wife for bail jumping. Additional plot lines come in from the fact that our two principals also each have other parties that are after them as well. Sounds like thereâs a lot of potential comedy just waiting to happen here, right? Well, Tennant doesnât deliver …

A B Grade comedy with A Grade Stars

âThe Bounty Hunterâ is just silly. That is the best word to describe the film. It is over the top and completely predictable. Even by looking at the poster for the film, you can tell exactly what the ending is. The concept is not one which is meant to be serious in the first place and does seem to be perfect for a comedy, but could have been toned down far more than how it was presented. Every ex-husband out there will toy with the idea of taking their ex-wife to jail and do so with glee, but the presentation of it as an on screen comedy just doesnât work. Milo (Gerard Butler) is an ex-policeman who makes his money by being a bounty hunter. He is over the moon when he finds out that there is a warrant on his ex-wife, Nicole (Jennifer Aniston). Milo becomes mixed up with a story …

I went into this movie with some pretty high expectations. It had a good solid cast, and a plot that looked like it had a lot of potential. I have to say, I left somewhat disappointed. Gerard Butler and Jennifer Aniston were well cast in their roles, and played well off of each other. There were some humorous parts, but I felt they were few and far between. The plot is what really disappointed me. There was definately a storyline, but it wasn't very well defined, and almost became an afterthought. As a result, the film became all about the two lead actors, and that made it just another cute, predictable love story. In the end, the underlying story really made no sense. Overall, I did enjoy the film somewhat because the acting was good, but I would not hurry to recommend it or …

No posts have been made on this movie yet. Be the first to start talking about The Bounty Hunter!