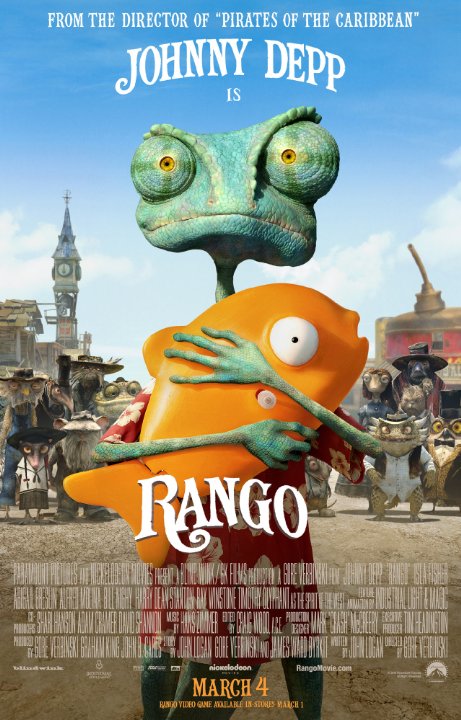 Plot: A chameleon aspires to be a hero and finds himself in that very role when he arrives in a town beset by bandits. -- Chris Kavan

Even in this animated version of an existential western, Johnny Depp is undeniably charismatic.

A pet chameleon (Johnny Depp) accidentally falls of an owners car. The town mayor (Ned Beatty) appoints Rango as the new sheriff in town while Rattlesnake Jake (Bill Nighy) becomes a threat. Visually it was gorgeous and life-like, humor and with regard to the plot, falls short. As mentioned by previous reviewers, this animated and at times serious film is for adults. Pace of the beginning was sluggish and eventually moves once he declares his "legend." Western references even The Man With No Name surfaced. One of the best lines: "No man can walk out on his own story." Rango is a western animation that touches on the subject of believing in ones self while fate and luck plays a huge role in fulfilling his destiny.

I struggled with this movie since its release, partially because I had some trouble defending why I like it as much as I do, but mostly because nobody else seems to like it as much as I do. In a Looneyman run world Rango would probably be its own religion, Rango 2: Rattlesnake Jakeâs Revenge would have been the highest grossing movie of 2012 and the Palisades Rango Action Figures would be raking in millions. Fortunately for the rest of humanity I am not dictating the taste of humanity. Unfortunately for me there is no proper Rango club or Rango fan site that I can join. Everyone (except me) forgot about this movie mere months after it was released, and now Iâm alone, driving a fan-wagon that nobody else ever got on.

Rango, much like The Muppet Movie, is a surprisingly deep …

The story is about a bug-eyed lizard who has spent most of his life alone playing in an aquarium until one day it crashes on the highway. He wanders through the desert, evading hungry birds and heat exhaustion until he comes across a prim and proper lizard named Beans (Isla Fisher) who is struggling to keep her father's ranch. Lamenting the mysterious lack of water in her Small Wild West town of Dirt, she decides to bring Rango along where he quickly realizes that finally he has the chance to be somebody. When he walks into the local bar he is harassed by the locals but being the Thespian chameleon that he is he quickly comes up with a character and a name, Rango and decides to embellish certain facts about his life, starting with the fact that he's a talented gunslinger.

I shutter to think that this is Gore Verbinski's first children's movie since the atrocity Mousehunt. Known for directing The Ring, and more prominently the Pirates of the Caribbean films, Verbinski has for a second time delved into a film with a younger demographic in mind. The only problem is that while something like Mousehunt needed stupid, childish humor to even attempt to save it from its awful premise, Rango really shouldn't have been dumbed down to that level.

During a road trip of some sort, a pet lizard is lost in a near-accident and he must find his way to civilization. He soon finds himself in the small, aptly named town of Dirt. He realizes in his new surroundings that he can create a new persona for himself and becomes Rango: The toughest sheriff in the West. From this …

No posts have been made on this movie yet. Be the first to start talking about Rango!