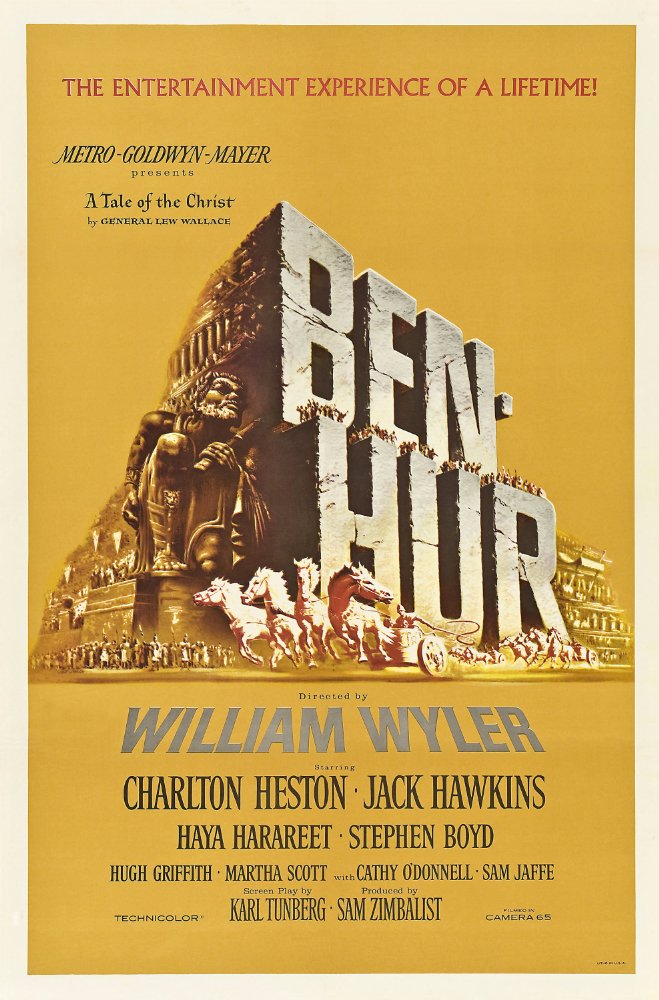 Plot: A Prince is accused of a crime he didn't commit and is betrayed by the ones he knows as he is sent into slavery. He rises to the top to gain his revenge.

The battle scenes and immortal chariot race are astounding, but the movie grinds to halt as soon as the hammy dramatics take charge.

To refer to Ben-Hur as a sample of perfection in filmmaking is an exaggeration, but not so big. Wyler's fantastic vision and scale is certainly not the very first adaptation of the story, yet it holds a seminal place among the greatest Hollywood epics. There is no equivalent picture to this film in the 50s; the influence Ben-Hur planted as a seed in the prolific year of 1959 would grow and flourish during the 60s. Even now, technically, the chariot race is also mind-blowing. 97/100

Charlton Heston stars in this classic historical epic as a jewish prince betrayed and condemned to death by a Roman tribune. It's one of his defining performances and he charismatically heads a great supporting cast in a well written if overlong tale of revenge and redemption. It takes a little too long to get going, and the subplot involving his mother and sister is melodramatic nonsense, but when Chuck is on the warpath it's great, and the chariot race is a scene every movie lover should see. Not as good as Spartacus, but still one of the best examples of the genre.

Having viewed this again as an adult one can truly appreciate the beauty of this picture. A wealthy Jew named Judah Ben-Hur (Charlton Heston) and childhood Roman officer Messala (Stephen Boyd) have disputes due to different beliefs. Ben-Hur's mother and sister Miriam (Martha Scott), and sister Tirzah (Cathy O'Donnell) became peasants during the reign of Messala and was tendered by Esther (Haya Harareet), a daughter of a loyal servant. Ben-Hur encounters Jesus Christ twice. Had tremendous action sequences and enormous cast and set pieces without the aid of advanced computer graphics. Performances were realistic and screenplay and score were endearing.

One of my favorite lines: Messala: "It's an insane world, but in it there's one sanity, the loyalty of old friends." Arrius: "You …

Epic that will stand the test of time.

Ben Hur is one of the greatest movies of all time. I just wish Hollywood could make a movie like it now. It's a story that plays like a novel (cause it's based on one). Charlton Heston (Judah Ben Hur) is great in the movie. I like his acting. Ben Hur has some of the best action ever and as a story can't hardly be beat. It's drama at its best. It's the story of a family that had it all, was destroyed and then given their lives back. Ben Hur depicts both the best and worst of the Roman Empire, its glory and progress and the oppression of the less fortunate who lived under its rule. There are two action scenes that really get my heart pounding each time I see the movie. First, the scene on the galley where the slaves are put through a grueling, forced rowing of their ship under the eye of …

After Judah Ben-Hur (Charlton Heston) is betrayed by his friend Messala (Stephen Boyd), he is sent into slavery. While on his journey for revenge, he meets Jesus of Nazareth (Claude Heater), which later becomes a vital part of his journey in the Best Picture winning "Ben-Hur."

I remember a few years ago when Mel Gibson released "The Passion of the Christ" and everybody thought it was THE religious movie. After watching âBen-Hur,â I wonder if any of them had sat through the 3+ hours and understood the masterpiece. I also wonder how anybody could like that garbage that Gibson passed off as being spiritual when all it was was a gorefest for simple-minded Christians to see, but that's for another review (maybe I'll do that one next Easter).

Heston's acting is phenomenal and he, as …

No posts have been made on this movie yet. Be the first to start talking about Ben-Hur!