Get Him to the Greek Movie Information 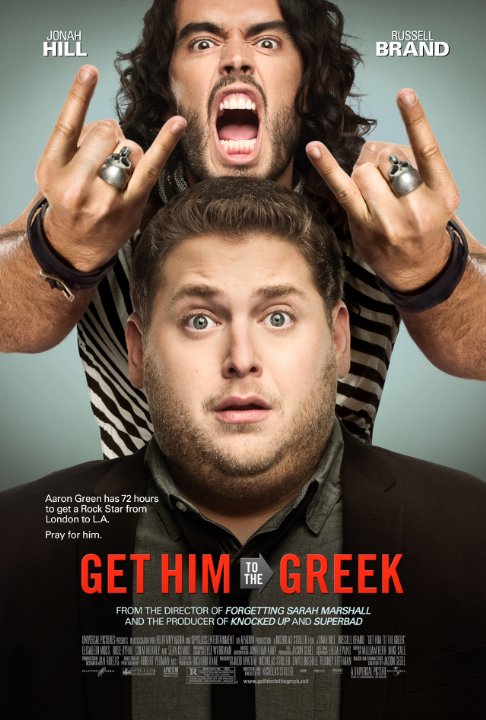 Plot: An ambitious record company intern has weaseled his way into a dream position - taking care of British mega-star Aldous Snow as he begins his new $100 U.S. tour at L.A.'s Greek Theatre. But it runs out that running with a sex symbol/party animal does have a downside, and if he can't keep his charge under control he can kiss his job goodbye. -- Chris Kavan

Not quite the seamless comedy "Forgetting Sarah Marshall" was, but it's just as funny.

Some funny parts in the film and Sean 'P. Diddy' Combs character had me laughing at times, but the film overall didn't really do much for me has a comedy. Yeah I laughed a couple of times has I said before and that's really it really. The movie itself is kind of a bloated, doesn't know what's it doing movie.

I really wanted to like this movie. The cast is likable and Hill and Brand have great charisma together. Try as I might, though, I didn't laugh nearly as hard as at Forgetting Sarah Marshall and the film had a "forced sequel" quality to it, as if the director felt the need to up the ante by injecting more sex, drugs, and mayhem. Despite the rockstar plot points, a lot of these elements felt like they didn't flow organically from the plot and drowned out some of the sweeter character beats that the actors are given. Still funny at times (Diddy is a scene stealer,) but not as good or even as lampooning of the music industry as it could have been.

Get Him to the Greek review

Aldous Snow's (Russell Brand) career is on the decline. Head of Pinnacle Records Sergio Roma (P. Diddy) is searching for fresh ideas to improve revenue. Aaron Green (Jonah Hill) suggests on getting Snow to play at the L.A.'s Greek Theatre. Direction was MTV like though the cameo's, utilizing pop culture resources were intuitive. The flick obviously had a killer soundtrack and laughable original songs for the rock star. Brand was obnoxious and rowdy while Hill obedient and subtle, both made solid efforts. P. Diddy was cool playing out the comedic scenes. Some sequences were just too difficult to believe such as the drugs and fight after the "Jeffrey" drug. Not as funny as most comedies though it has a heart in a way with topics on monogamy, father figures, friendship, fame, and …

No posts have been made on this movie yet. Be the first to start talking about Get Him to the Greek!