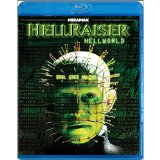 Plot: Pinhead returns to kill people who have opened a virtual invitation to a party.

I'm not sure which number in the Hellrasier series this film is, but I remember it being my favorite one, besides the original. It's about a group of kids who are invited to a cube party at a large house in the middle of nowhere, but they don't know that Pinhead waits there for them and they are walking into a trap that only a few have escaped. Will the survive? Or will the become one with the cube?

Movies I Own by ghouls

My favourite movie series by Tjommi

No posts have been made on this movie yet. Be the first to start talking about Hellraiser: Hellworld!