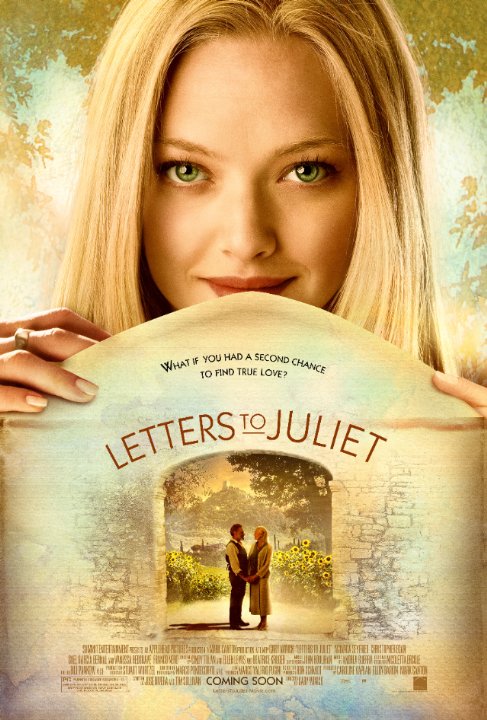 Plot: An American on vacation in Italy finds a "letter to Juliet" in the Verona courtyard of the fictional lovers - one of thousands left - and decides to take up the quest to track down the writer. -- Chris Kavan

"Letters to Juliet" is a story of an American girl who travels to Verona with her fiance. The businesses of the two lead to a sudden changed of the girl, Sophie. I like it! It feels good to me, but, not everything -because it is totally unfair for Victor! =( I love watching Amanda Seyfriend, as well as Bernal over Egan. The story seems to be full of love, yes Indeed. But, i can't really say that it is realistic nor magical love story- well, maybe it could be. At least, this movie doesn't fall under "romantic-but-huh?" films. =D and I LOVE ITALY &#9829;. =D

It was extremely predictable. But, Seyfried is beautiful, and so is Italy.

This movie is like a chocolate truffle--sweet and enjoyable. It's as predictable as any romantic comedy may be, but just because you know what you are going to get doesn't mean that you are getting a bad thing. This is a very easy hour and thirty that is definitely a suitable filler on a Netflix queue.

Sophie, an aspiring journalist accompanies her boyfriend Victor (Gael Gabriel Bernal), a workaholic chef to Verona, Italy. While he gathers the finishing touches he needs to open up his restaurant in New York, she wanders around the countryside where she stumbles across the famous "Juliet wall" and discovers the charming custom of lovelorn women writing letters to four women who call themselves "Juliet" about their lost loves. Sophie takes the job as the fifth and youngest Juliet, and finds a letter dated back from 50 years ago pushed inside the wall that has never been answered. Sophie decides to answer it, and writes a letter back to Claire who is now a grandma. After waiting fifty years, Claire is amazed to get a response and immediately travels with her grandson Charlie (Chris …

The story line to this movie, is very cute, and very girly. With that being said, it is very cookie cutter and the outcome fairly predictable. I like a good love story, but I felt like I had watched this story unfold before my eyes on the big screen more than one time. It's not a very unique story line. Seyfried does have a certain sweetness and charm, which to me is why the movie wasn't a flop. It is definitely a chick flick and not one to make your boyfriend or husband sit down and watch. This movie isn't one that I would necessarily want to watch again, however, it wasn't so terrible that I wouldn't watch it with a girlfriend again if she wanted to see it. Bottom Line: It's cute, It's charming, but the ending is totally predictable. It's hard to really engage in the movie because of …

I just couldn't get past the fact that she's basically cheating on her fiance. Oh and the guy she supposed to be falling for has all the charm of a bump on a log. He's a jerk to her and then all of a sudden we're supposed to believe that she's fallen for him. NO! And he not even as cute as her fiance. Now her fiance has a Spanish accent (Spanish accents way more sexy than English). He's a chef who cooks yummy things for her and took her to Italy. Where is the choice?
Oh and she gets all annoyed at the fiance cause he's working with his suppliers for a restaurant he's opening back in New York. I'm sorry, but he's working get over it.
Basically this movie is telling you to go with the Anglo (Nazi poster boy) aristocrat over the Mediterranean swarthy working class guy that you're …

Movies I want to watch by ML_Lean

No posts have been made on this movie yet. Be the first to start talking about Letters to Juliet!