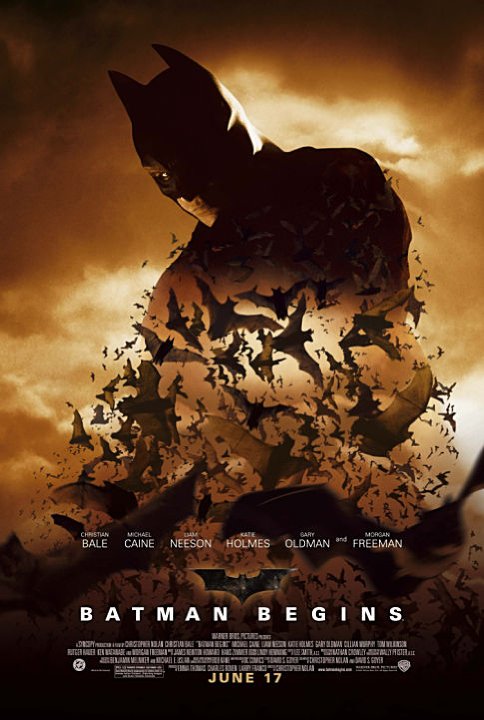 Plot: A prequel to the Batman movies that remakes Batman to be more of a "real life hero" instead of a comic book fantasy. Standard Batman plot with more explanation as to how he became Batman and how he obtained his futuristic weapons.

An origin story of one an undeniably iconic character, "Batman Begins" is an excellent beginning to a promising trilogy.

This film is a perfect representation of how thrillers can meet superhero movies.

"Am BATMAN!!". It's just awesome to see batman kicking ass again.good story and good music and the score.

Batman Begins is more than just your typical, silly, Sunday-morning Batman piece. It's a work of art.
Before this movie, that's all that Batman was. A silly popcorn flick.
But then the Nolan struck the cinemas...
He gave Batman a meaning. He didn't just tell you: hey look, a bat suit, doesn't it look cool? No. He said: Here's a person. A person who is tormented by the fact that his city is dying, and wants to spark a symbol, so that people will stand up to their fears. So he picks his fear: Bats.
Brilliant.
Christopher Nolan taking over Batman is the best thing in cinema since Kubrick. I couldn't imagine a better re-imagining.
I cannot praise the brilliant screenplay enough, because it portrays elements of Bruce Wayne, which don't only describe him as a person and as the Batman. …

Does it come in black?

When a director is faced with the task of rebooting a franchise that ended in horrific fashion, their duty is both simple and difficult. On one hand, just about anybody could make a movie better than Batman & Robin. On the other hand, where do you go in terms of making the new franchise your own? Director Christopher Nolan lets fans know from the very beginning that his Batman is a much more dark and complex character, creating the most human portrayal of Batman yet.

We learn immediately that Bruce Wayne is terrified of bats. He fell down a well as a child, which caused the bats at the bottom to panic and swarm all around him. This moment in his childhood left a serious mark on his life, but not as serious as one that would soon follow. Bruce witnesses the murder of his parents, as …

Christopher Nolan had already proved he could do characters and dialogue and in this latest reinvention of the classic comic book character, he proves emphatically that he can do action too. Taking cues from Tim Burton's previous attempt to bring the character back to its dark roots, Nolan's vision is so gritty and believable it makes Burton's film seem as comparatively camp as the Adam West TV series that preceded it. This origin story has no radioactive spiders or associated sillines; just an intelligent examination of a man's guilt and desire for revenge and the psychology of fear. This combined with unlimited resources that wealth can provide, Batman is born utilising some brilliant production design that not only looks fantastic, but also looks plausible. Bale was the perfect choice …

Top Ten Films of 2005 by KingoftheCorn

No posts have been made on this movie yet. Be the first to start talking about Batman Begins!