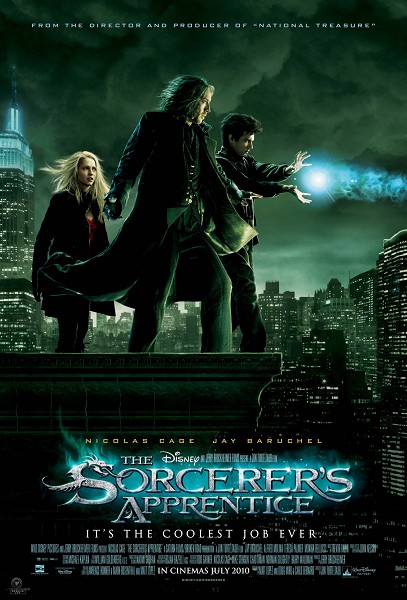 Plot: Balthazar Blake protects Manhattan from the evil Maxim Horvath, but even a modern-day sorcerer needs help. Recruiting the seemingly-average Dave Stutler, an apprentice with hidden talent, the duo must expel the darkness if the training doesn't kill Dave first. -- Chris Kavan

It was okay. not bad but not brilliant.

Surprisingly decent and entertaining. Cage and Baruchel are good together, and the effects are good too. Overall, I liked it. Very similar to Percy Jackson which I also liked.

Being somebody who hasn't read the books I wasn't sure what to make of this film. I am a Nick Cage fan though I have been disappointed with a bunch of his newer movies. Overall though I really felt like this movie kind of got a bum rape. The characters are all likable even one of the villains is an extremely fun character. The plot movies along okay even though it kind of peters off at the end into the normal Hollywood ending. If I had seen this in theaters I probably would have been disappointed to drop 10 bucks on it but renting it I really felt satisfied, overall a pretty good watch.

"The Sorcerer's Apprentice" is a fun-filled fantasy film. The story revolves around from-the-past-sorcerer Balthazar and his modern-geek-apprentice trying to save the world from the rising of evil spirits.

I had fun watching Nicolas Cage on this movie, I appreciate him more than his performance on Kick- Ass. Baruchel's acting was lame for me.

The story's setting was somewhat random for me. I'm not sure, but i think there were glitches on the film.

Lots of familiar scenes and the immediacy of scene transitions became critical to the overall sound and turned the whole picture so random- no drama felt, well actually, no feeling at all!

HOWEVER, I can say that one can still enjoy the film- just don't pay too much attention on the details. =)

No posts have been made on this movie yet. Be the first to start talking about The Sorcerer's Apprentice!