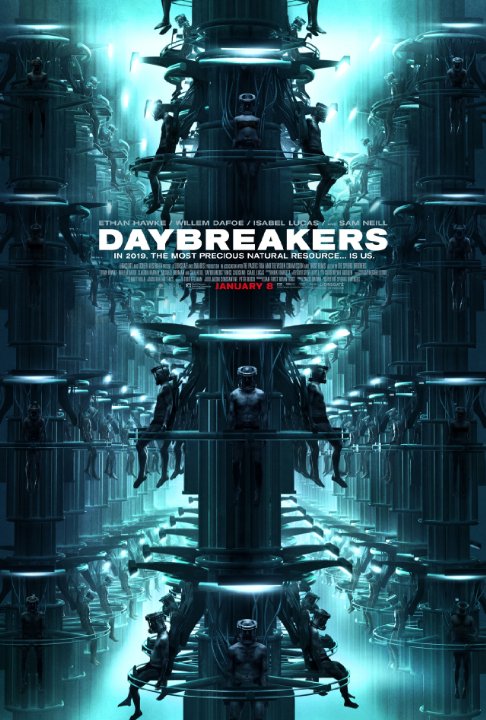 Plot: In 2019 most of the population has been transformed into vampires by a plague. With the blood supply dwindling, groups plot their survival while an underground group secretly works on a cure to reclaim humanity. -- Chris Kavan

Fresh off the success of their inventive take on the zombie genre, Undead masterminds Michael and Peter Spierig direct Ethan Hawke in an ambitious tale of a futuristic Earth populated entirely by vampires, and the efforts made by the creatures to ensure that their food supply doesn't run out as humankind is faced with extinction. This movie was a okay vampire film with good action scenes and lots and lots of blood.

I'm surprised I enjoyed this as much as I did. That's not to say it doesn't have faults, just that it turned out much better than the premise and actually made vampires seem fresh again.

Vampirism has spread throughout humanity to the point where they vastly outnumber the normal humans who have been turned into livestock to replenish the rapidly diminishing stocks of blood. Daybreakers was a really nice surprise. In the seemingly endless parade of pointless vampire films it has a really fresh feel to it as it puts a different spin on the idea rather than rehashing the same old schtick. Ethan Hawke has made a career out of playing off beat, vulnerable anti-heroes and Sam Neill and Willem Dafoe bring their usual dominating presences to the screen which combined with some really nice production design and a smart script makes for a refreshingly different fang flick. My only reservation was with the open ended conclusion which made me think that the Spierig brothers were …

No posts have been made on this movie yet. Be the first to start talking about Daybreakers!