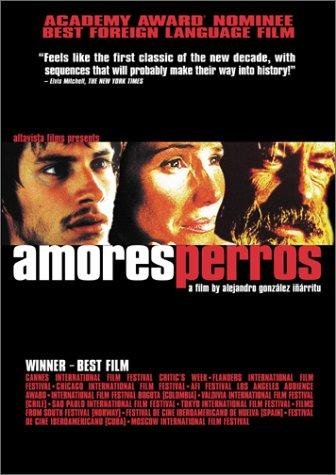 Plot: A severe car crash involves three different stories as they cope with life through changes, a different kind of love, and many regrets.

An intense, multi-layered plot. It is to Gonzalez-Inarritu's credit that each flawed character's plotline is played out fully and perfectly and doesn't get lost in the twisting and turning conjoined masterplot.

Superb multi layered Mexican anthology which is raw, brutal and highly compelling. Borrowing unashamedly from Tarentino, this is an audacious and incredibly ambitious tale featuring deeply flawed and at times unlikable characters who nevertheless elicit sympathy and equal measures of despair. Human nature and sometimes the lack of human kindness are explored fully through three intertwining stories tenuously linked to a horrific car crash. A story about loss, betrayal and responsibility is brilliantly realised in this masterpiece of Mexican cinema.

One of the best multiple story lines movies created. A personal favorite from the directors trilogy (which include this, 21 Grams and Babel). Masterly woven characters and situations with moral aspects and electrifying acting. The film is divided into three stories, but each character naturally interconnects with each other. First act is about the kindhearted Octavio and self sacrificing Susana. It likewise involves the brother of Octavio, the brute and insensitive Ramiro. Second segment would be about Daniel, who leaves his family for a model named Valeria. The final act is about El Chivo and Maru. Chivo was given a job to dispose somebody and makes amends with his daughter.

Authentic performances from everybody involved. The direction, pace of the story and soundtrack …

My favourites by Miroslav

No posts have been made on this movie yet. Be the first to start talking about Amores Perros ( Love's a Bitch )!