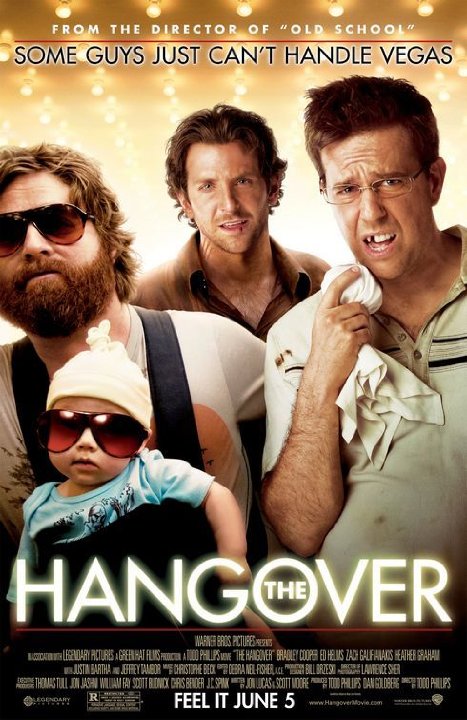 Plot: Three groomsmen lose their charge on during drunken misadventures in Las Vegas. They find themselves retracing their steps in hopes of finding the missing groom-to-be.

Elevated by a charismatic cast, "The Hangover" is a fun time even if it's not nearly as funny as its outrageous premise implies.

okay the new hangover part 3 is coming out soon so let's talk about the first and the second one.the hangover.this was one of the best comedy movie of 2009 I mean 2009 was a bad year for movie's but this movie just made us forget the bad movie's that we got that year.

A good wacky comedy...... some funny moments in it !! the first movie i ever saw Zach Galif in was Due Date though, which was much funnier.

"Four of us wolves, running around the desert together, in Las Vegas, looking for strippers and cocaine. So tonight, I make a toast!" Surprisingly, this movie from a real event has a simple premise yet very entertaining results about a group of friends adventure before marriage. This reviewer recalls having some laugh out loud moments throughout the film which mixes mystery and comedy. Doug Billings, and his best friends Phil Wenneck (Bradley Cooper), Stu Price (Ed Helms), and Tracy's brother and Doug's future brother-in-law Alan (Zach Galifianakis) travel to Las Vegas. The soundtrack was jumpy and hilarious on its own. The artists though some outlandish, were convincing especially Cooper and the scene stealer of the movie, Galifinakis. Screenplay was one of its main strengths with …

One of the funniest movies I have ever seen!

Unless you're some smug, pretentious, uptight anti-social person that people don't like to hang out with you're gonna love this flick. It's hilarious. Off hand the "group of guys going to Vegas for a bachelor party" doesn't sound enticing or something that could make for a great movie since it's an epic retread in cinema but director Todd Phillips takes the idea and runs with it. The movie, unlike most, doesn't center around the bachelor party but the next day as the guys try and trace their way through the night and figure out what exactly happened the night before in a drunken haze. The flick plays like a whimsical, drug induced detective story. They chase leads, confront many colorful characters, and find themselves in and out of trouble while trying to piece together the pieces of …

The Hangover is the funniest movie in the world. Everything that happens in this movie is funny. Bradley Cooper was terrific he played his part very well. But Honestly I think Zack Galfinakis stole the show. He is one of the funniest guys I've ever seen on film. I rank him with Seth Rogen, Paul Rudd and Jason Segel. He keeps playing roles like this he will go down as one the funniest actors ever. Ed Helms played a pretty funny part in this movie as well. Mike Epps had a cameo that was funny as hell. The Chinese guy from Role Models and Knocked Up was very funny. If your down for a good night and want to laugh and have a good time watch The Hangover you will not be let down. Funniest Movie Ever. Props to Todd Phillips also director of Old School keep them coming. If you ever had a crazy …

No posts have been made on this movie yet. Be the first to start talking about The Hangover!