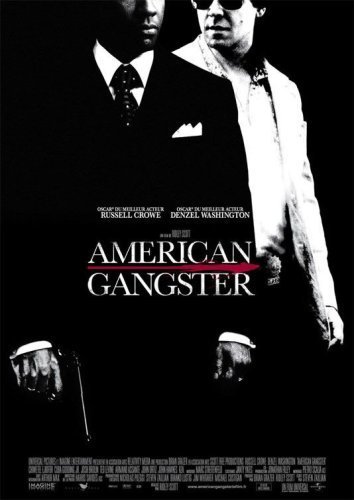 Plot: Based on a true story about a gangster who smuggles in drugs in the coffins of dead Vietnam soldiers while a detective tries to track him down.

Movie was pretty boring and predictable. I never felt any attachment to the characters or any interet really. Many crime movies have been done better.

Director Ridley Scott masterfully recreates the time period of the story he is telling with tremendous accuracy. I wish the story had gone a little deeper emotionally, but as far as telling a straightforward crime story, it's pretty slick.

The story is about Frank Lucas, the quiet driver to one of the inner city's leading black crime bosses. But when his boss suddenly dies, Frank exploits the opening in the power structure to build his own empire and create his own version of the American Dream. Through ingenuity and a strict business ethic, he comes to rule the inner-city drug trade, flooding the streets with a purer product at a better price.

They always comes a time in movies were I mostly get sucked in by the character's or story, and American Gangster does both right, because this is a flawless movie with spellbinding acting and brilliant directing.

This movie is not like other Ridley Scott movies. Neither Sci-Fi nor drama/action. This time he tried crime. And it totally worked. He chose a damn good script a great cast and a good crew.
The cinematography is astonishing it looked damn real. The production design and the costumes were great either. It was fitting perfect. Russell Crowe finally gives a great performance again and Denzel is just as always perfect. The rest of the cast is great too. Especially the mother of Frank Lucas (I don't know the name of the actress)
Ridley Scott took his job very serious again, and makes the movie look more perfect. The movie gets even better because it is based on a true story. That all makes more interesting. The final showdown was a bit outrages I think but still this is a great movie …

"You can be successful and have enemies or you can be unsuccessful and have friends." - mafia boss Dominic Cattano (Armand Assante). There are times when Awards bodies don't give sufficient recognition to powerful, well crafted and lifelike films. This picture unfortunately falls under that presumption. having a copy of the alternate ending makes you appreciate the different ideas for the ending (and which is more effective). A real story focused on Frank Lucas (Denzel Washington), a right-hand man of mob boss Ellsworth "Bumpy" Johnson (Clarence Williams III). Honest Newark detective Richie Roberts (Russell Crowe) is hated by his colleagues and vows to get rid of police corruption. Nicky Barnes (Cuba Gooding, Jr.) is a criminal who has dreams while Nick Trupo (Josh Brolin) have …

No posts have been made on this movie yet. Be the first to start talking about American Gangster!