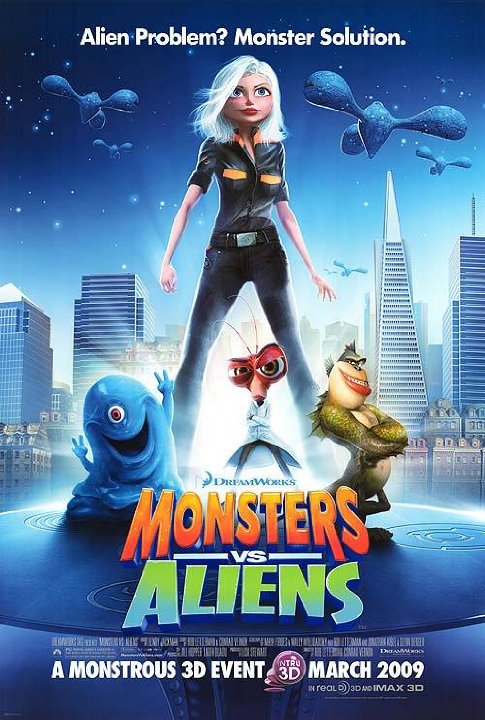 Plot: A young California girl is hit my a meteor and transformed into a giant monsters. Caught by the government and sent to a secret facility, she meets other monsters that have been rounded up over the years and is soon pressed into service to combat an alien invasion.

"Monsters vs. Aliens" isn't the worst low-aiming animated feature ever, but what is there to really recommend when a movie does little more than check off the typical boxes.

Not as terrible as I thought it will be.

Surprisingly a fun and smartly written film. Based on the cast, a lot of the film contains some of the improvised comedic moments that are often found in Judd Apatow films. Vivid animation and a unique take on the sci-fi genre.

It delivers the funny and that all it needs to do!

Hey Guys, watched Monsters vs Aliens for the second time recently this time on DVD so it was without the added bonus of true 3D. However the movie is still brilliant in my eyes. I thinks its Dreamworks first good animation since Shrek and although it won't be remembered as much as Shrek it delivers on equal entertainment. Even though it is classified as a family film it's humor is more for grown ups without being too offensive. Even the second time I noticed more subtle jokes that I missed the first time I seen it. The story line is a bit quick but I think if they tried to do anything else for the characters it would have been something already done to death in animations. It was just the right amount of self belief story we need the rest of our attention could go towards enjoying the …

While the animation does look great in 3D, I didnât enjoy it as much as I thought I would because it didnât have enough heart. Essentially, as the title suggests, monsters must battle aliens. Reese Witherspoon lends her voice as Susan Murphy, a woman who gets turned into a giant after being in contact with a meteorite. Other stars include Seth Rogen as B.O.B the blob, Hugh Laurie as Dr. Cockroach Ph.D., Will Arnett as The Missing Link, Kiefer Sutherland as General W.R. Monger, Rainn Wilson as the villanous Gallaxhar, Stephen Colbert as the President of the United States, and Paul Rudd as Derek Dietl, Susanâs self-centered husband-to-be. Their voices didnât distract me from the story but I wish the story was more interesting. Even though thereâs references to other movies like …

No posts have been made on this movie yet. Be the first to start talking about Monsters vs. Aliens!