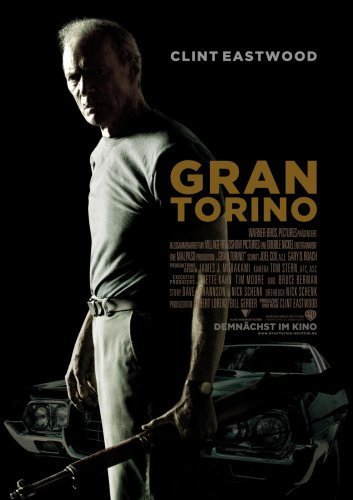 Plot: When a teenager tries to steal his prized 1972 Gran Torino, a Korean war veteran decides to take matters into his own hands and reform the boy. -- Chris Kavan

It's an excellent film that manages to include as much humor as it does thoughtful commentary on race, gang violence, war, and generational values.

Best client Eastwood movie that I have seen.

I wasn't sure about this film at first but I would rate it 10/10 good plot and good acting..

Misanthropic Korean war veteran Clint Eastwood is dismayed when a Hmong family move in next door but he learns to respect them when they welcome him into their home after seeing off a local gang who threatened their socially dysfunctional son. Touted as Clint's farewell performance, this film can best be described as "Grumpy Old Harry". Unforgiven was the resurrection and deconstruction of an aged Man With No Name, and Walt Kowalski is the same for Harry Callahan and so is a fitting swan song for Eastwood's career. It's format is the extremely formulaic racist-changes-his-ways-when-he-actually-gets-to-spend-time-with-the-object-of-his-derision that will be familiar to anyone who's ever endured an afternoon TV movie, but it is of course Eastwood who raises it above the mundane. His …

Get off my lawn!

As he approaches his 80th birthday, film legend Clint Eastwood shows no sign of slowing up, seemingly concentrating on his directorial duties these days, Clint appeared as an actor in only four films in the Noughties ending the decade with one of his finest performances ever.
Playing a cantankerous grizzled veteran of the Korean War, Eastwood is simply magnificent in a tale, which explores racism, old age and redemption.
Gran Torino is a suspenseful and gripping drama tightly plotted and compactly directed by the man himself, more intimate than most of Eastwoods later films, Gran Torino plays like a "Harry Callahan" in retirement kind of movie yet ends as an enthralling character study of a man forced to confront his demons and make peace with himself.

No one plays a mean, old cuss quite like Clint Eastwood. As a Korean War vet who just lost his wife, and a disdain for just about everything and everyone around him, Walt Kowalski is that old man in every neighborhood who tells kids to get off his yard... only he can back it up with iron instead of just words.

Better yet, he's also an unabashed racist - which is a problem when the rest of your neighborhood happens to be populated by Hmong. Despite his extra-tough exterior, Walt isn't a monster, he isn't evil - he may be a bit pessimistic, but given the circumstances that's understandable.

Ignoring his pleas to be left alone, his Hmong neighbors treat him kind of like a local hero when he scares off the local gang. His even takes his next-door neighbor, Thao under his wing. He still …

No posts have been made on this movie yet. Be the first to start talking about Gran Torino!