This movie is a smogasboard of cameos ranging from the most familiar names and facesâAdam Brody, John Krasinski, John Choâto those whose faces are familiar but their names give us a hard time recallingâJayma Mays, Marion Ross, Rick Hoffman. But this movie wouldâve been a complete mess without Anna Faris. She once again proved to meâtwice to this year along with âThe House Bunnyââthat she can elevate an average movie into a pretty good one. For me, Faris is like Steve Carell: both can stand in one place and not do anything but they never fail to make me laugh out loud. I was shocked when I found out that Gregg Araki directed this stoner comedy. Itâs the complete opposite of the moody, serious, and masterful âMysterious Skin.â What I like about this film is that … 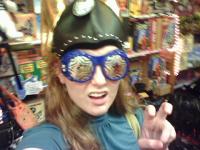 So I feel like I have to admit from the start that I only watched this film for two reasons: 1. I have Netflix and it was available to watch instantly online. 2. I have a huge celebrity crush on John Krasinski and was eager to see him in something other than The Office.

The movie begins with Scary Move's Anna Faris, a struggling actress and toker extraordinaire, awaking to find her somewhat creepy and nerdy roommate (played by That 70's Show's Danny Masterson) has left some tempting cupcakes in the fridge, strictly off-limits to the munchy craving Faris. After gobbling down her discovery, she soon realizes these weren't just ordinary cupcakes. And oh no! She has to go to an audition, manage to drop off the electricity bill, and bake a new batch of special cupcakes! How will she …

No posts have been made on this movie yet. Be the first to start talking about Smiley Face!