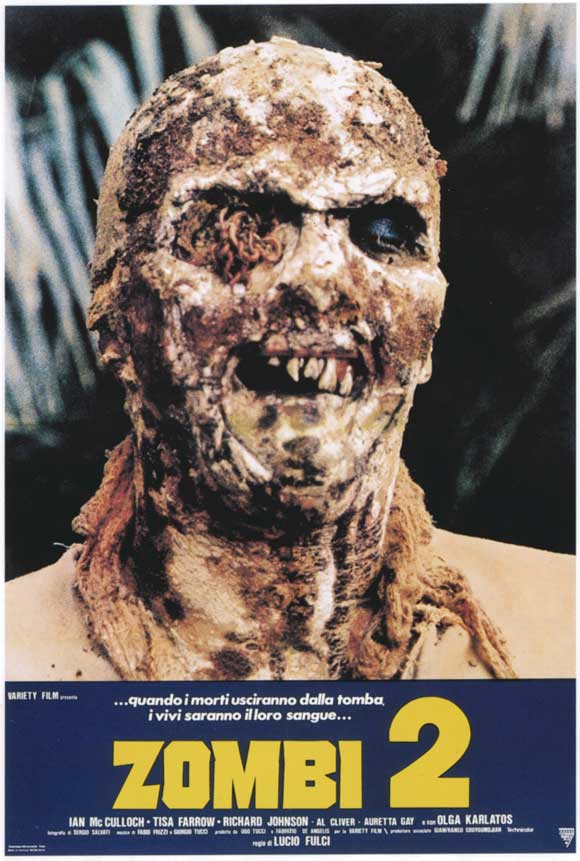 Plot: A Zombie is found aboard a boat off the New York coast which belongs to do a famous scientist. Peter West,a journalist, travels to the Antilles with Ann, the daughter of the scientist. On the way, they meet with with Brian, a ethnologist, and Susan. When they arrive at Matul Island, they find Dr. Menard, and discover a terrifying diease which is turning the Islanders into horrifying Zombies which devour human flesh and seem indestructable....

WOW, Worth watching just to see the zombie fight the shark

Decent entry in the giallo cannon. An unofficial sequel to Romero's Night of the Living Dead, Fulci's film is known for two unforgettable scenes: the zombie vs. shark attack and the eye gouge scene. Worth to watch for that alone.

As far as the 1970âs to early 80âs zombie fare goes, one could do a lot worse than Lucio Fulci. Granted, he is no George Romero, and I donât think he comes close to equalling the overall goodness of THE LIVING DEAD AT THE MANCHESTER MORGUE. However, Fulci has done something that none of his equals or even superiors have done and that is make a zombie fight a shark. Those of you who know this movie know what I am talking about. Like me, the first time you saw this scene you were probably too taken aback by it to fully appreciate it. Those who do not know this film, it is worth the watch if you are at all a zombie fan.

This film boasts the classic slow zombies that are intentful and single-minded. Ironically, the aqua-zombie moves faster in the water than on land. That is …

No posts have been made on this movie yet. Be the first to start talking about Zombi 2!