To Have and Have Not Movie Information 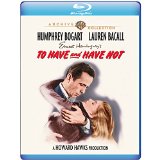 Plot: A man, a boat, and an island - all ready for hire. Romance.

Although not as loyal to Hemingway's novel as the Frenchmen are to their cause, "To Have and Have Not" is a post-"Casablanca" classic that marked the first of several pairings of the Bogart and Bacall dynamic duo.

I might be in love with Lauren Bacall. How can a 19 yr old be that self-possessed? The story itself is a bit flimsy, though.

I thought it was excellent. Of course, my favorite character in this movie was Eddie. He was hilarious! And Bogart was as darkly good as ever.

"To Have And Have Not" by Yojimbo

Cynical fishing boat captain Humphrey Bogart finds a cause worth fighting for when he becomes embroiled in the affairs of the free french in Martinique during WWII. This film shares a lot of similarities with the superior Casablanca, but it is a much more lively affair, featuring machine gun battles, plenty of local colour, and Bogart's trademark two-fisted tough guy when dealing with the corrupt Vichy stooges. Walter Brennan also sheds his stetson to play Bogie's rummy sidekick and provides the comic relief, but the plot is almost superfluous; this film is all about Bogart and Bacall whose on-screen chemistry positively crackles. The dialogue between them is fantastic, and Bacall is at her most stunning; she is the very definition of sultry. One of the great on (and off!) screen romances.

No posts have been made on this movie yet. Be the first to start talking about To Have and Have Not!