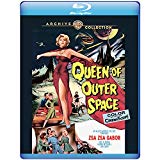 Silly and campy sci-fi movie about astronauts finding a Venusian empire ruled by a tyrannical queen. The sexual politics are corny but the script attempts to give the villain a sympathetic backstory. But only so far. Zsa Zsa Gabor plays a heroic supporting character that gets top billing. But she's kind of bland to be honest. As a cult classic, it's suitable viewing for those curious.

The preview looked pretty bad, but I saw it anyway. It was pretty unbearable.

Worst Films of the 1950s by truckturner

Movies Watched in january 2011 by pulpjunkie

No posts have been made on this movie yet. Be the first to start talking about Queen of Outer Space!