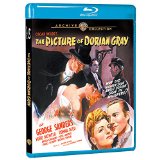 Plot: Dorian Gray seems to always look so young... he lives a very decadent life and it never seems to show on him. It is as though something else was aging for him... say a picture.

Literate adaptation of the Oscar Wilde story about a hedonistic aristocrat named Dorian Gray whose evil deeds are manifested in a portrait. This blesses Dorian Gray with a form of eternal youth, but his increasingly vile actions begin to take their toll on his psyche. As gothic horror movies go, it's slower paced but the cast is good and the morality aspect is engaging food for thought.

A Victorian-era gothic drama and a tense psychological thriller, "The Picture of Dorian Gray" depicts a man's moral decay at the loss of his youth.

one of Angela Lansbury's first film. once you see this movie you'll remember it always. Based on a story by Oscar Wilde, which George Sanders seems to be channeling through out the film. Hurd Hatfield plays Dorian Gray a man who seemingly never ages. And he does it really well. If your reading this just go watch this movie. trust me it's worth your time.

Unlike the Painting, has Stood the Test of Time

In Oscar Wilde's original novella, the mordancy and erosiveness of his captivating and ingenious wit circumvented the tired tropes of Victorian Gothicism and permitted the more philosophical Faustian themes of the tale to take centre stage. It was that perfect amalgamation of the irreverent and the meditative that convinced me to name the book as the greatest literary work of all time; and it was the refined visual style of director Albert Lewin that finally - after viewing a total of six meager adaptations - satisfied my high standards for the book's adaptation.

Certainly, the film does not have an efflorescent effect on its source material (man cannot reach a higher standard of perfection than that which is seen in Wilde's novella), but it does as much justice to it as is …

My Top Movies of 1945 by Indyfreak

No posts have been made on this movie yet. Be the first to start talking about The Picture of Dorian Gray!