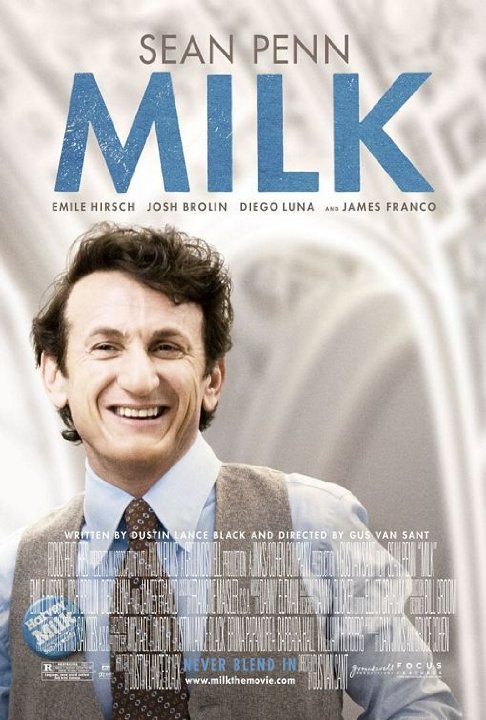 Plot: Explores the life and career of Harvey Milk, who was the first openly gay man elected to public office in 1977 as a member San Francisco's Board of Supervisors. -- Chris Kavan

Empowering and never preachy, "Milk" highlights a fearless and influential human rights figure with a movie that holds a genuine indie-drama nuance.

Another biopic covering the socially important deeds of one man. Typical in format and execution, there's not much to be desired in the story besides the facts of the events that took place. The issues are worth learning, as they as still relevant today. Good acting from a great cast is the highlight.

I definitely don't want to watch Milk again. I thought it was a depressing film although it was good. Sean Penn is very good in his role. Overall I give Milk 3/4 stars or B.

Milk is the biopic of gay rights activist Harvey Milk who became the first openly gay candidate to be elected to public office in America. As such it tells a very worthwhile story but the fact that it was based on a documentary very much shows; it feels like a series of dramatic reconstructions of events cherry picked from his political life with very little in the way of depth of characterisation or context, giving it the well meaning but rather clumsy and contrived vibe of a TV movie "true life story". But my biggest problem with Milk is its star; to me at least, Sean Penn has always been one of those actors who seems like an actor acting rather than a realistic portrayal of a character and seeing him camping it up in the part of Harvey Milk just failed to convince. Milk is certainly …

I was expected Milk to be kind of annoying. Now, I love me some gay rights, but I thought this would be so preachy and Sean-Penn-y and self-important. It kind of was, but goshdarnit, Sean Penn is such a good actor. It was inspiring and I loved the style and screenplay structure. I REALLY felt like I was in SF in the 70s. I visited the Castro District while on Spring Break and went inside Castro Camera (which is now a gift shop called Given). Being in this neighborhood really helped me to understand just how revolutionary and important and brave Harvey Milk was. Regardless of your feelings towards gay rights and gay marriage, please use Harvey Milk as a role model for anything you believe in.

Its very easy to hear a lot about how "important" this film is but no one really says anything on what makes it good. They might say the acting is so good but I felt most actually played stereotypes including Penn. If you look at the real footage their impersonations actually aren't that good they either over play like Penn, or their not quite right like Brolin. Some might find it interesting and that would the only reason they would like it. i just did not find it that compelling. Nor did it really make any firm arguments and it really failed to elaborate on many things. It showed Milk in a positive light no matter what. That really is the problem with many biopics there either make the person out to be complete sludge like in Nixon or they make them so glossy it is surprising they …

No posts have been made on this movie yet. Be the first to start talking about Milk!