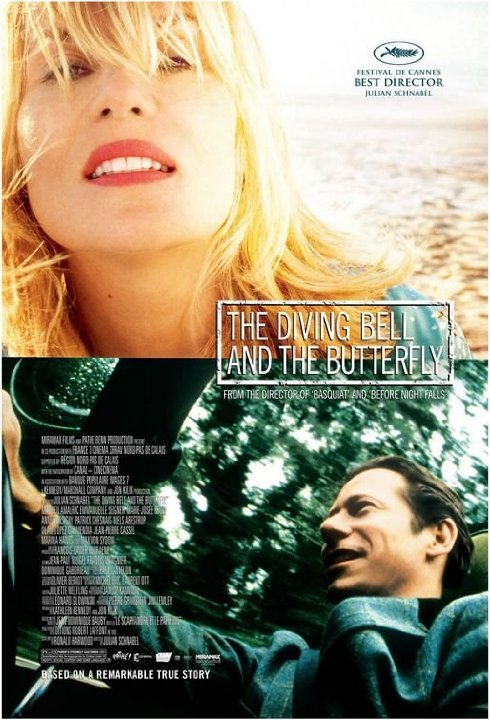 Plot: The Biography an editor who is paralyzed in virtually 100% of the body.

Going above and beyond the traditional biopic, "The Diving Bell and the Butterfly" is a painfully heart-aching reflection on memories and human desire.

A masterful combination of visual and aural images that skillfully place the viewer in the mind of a paralyzed man. The way such emotion and story is conveyed through a film whose main character basically can't move or talk is incredible.

Wow. This is like the stereotype of a dense foreign film with voiceover and "innovative" angles and plodding plot and whimsical imagery.

The Diving Bell and the Butterfly review

The story of "Jean-Do" Jean-Dominique Bauby (Mathieu Amalric), editor of elle Magazine who suffers from locked-in syndrome due to a stroke. He narrates how he is treated at a hospital in Berck-sur-Mer, France. It shows who his visitors (friend who was kidnapped in Beirut/mother of her children) were, his relationship with his father, how he communicates thru a speech therapist (Henriette Durand) and imaginations. His frustrations were also showed such as the simplicity of not talking to anybody on Sundays; a TV set being on and the ability to react to a gorgeous therapist showing tongue exercises. He dictates what he sees and experienced in his personal life. Bauby had the tenacity to create a book where he can leave his legacy.

Engaging from beginning to end, the movie never …

The Diving Bell and the Butterfly

I've been meaning to watch this for some time now, and I finally did, so yay! It was a critically acclaimed movie a couple of years ago and NPR talked about it every other second. It's a true story, based on Jean-Dominique Bauby's memoir. Bauby was the Chief Editor of Elle in France, and when he was in his 40's, he suffered from a major stroke that left his brain fully functioning, but everything paralyzed except for one eye. He learned to communicate through a system involving the alphabet, very patient people, and blinking. In this way, he wrote his memoir.

It was halfway through the film before I realized I was watching it dubbed. I kept thinking, "I thought this was in French! Why are they in France with French accents speaking English!?" Oh Amy. So, that cleared up the weird …

Iâm not going to deny that I didnât shed a tear while watching this touching film. From the first scene to the last, I was completely into it because the story is very human and the way the story unfolded is far from predictable. Julian Schnabel, the director, took many risks that actually paid off: one is placing the audience into the main characterâs body right from the very beginning. By doing that, we are immediately able to feel and hear what the protagonist wants to express whether we want to or not. Mathieu Amalric who plays Jean-Dominique Bauby impressed me so much. I thought that Amalric really was paralyzed and it hurts just to look at his condition. This is the first time Iâve heard of Locked-In Syndrome, where the person is aware of everything thatâs going on around …

No posts have been made on this movie yet. Be the first to start talking about Diving Bell and the Butterfly, The ( Scaphandre et le papillon, Le )!