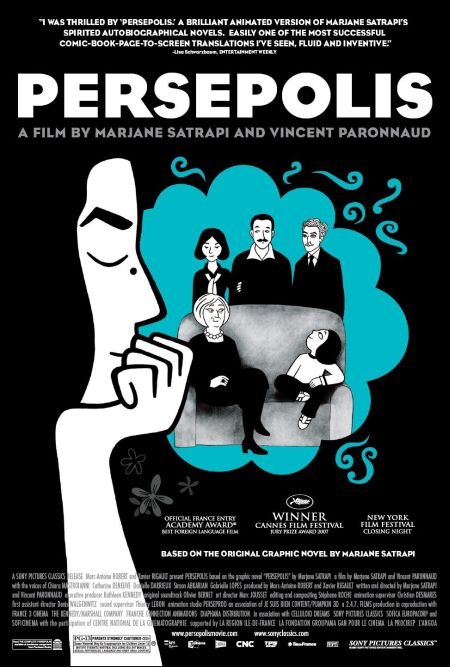 Plot: An animation story told of an young Iranian girl growing up just after the Islamic Revolution.

An intimate film that uses a minimalist style of animation to tell a story of personal and political importance. The way the film handles political themes through the eyes of young woman growing up is masterful. Worth studying within its historical context, as well.

A fine animated film, something which is in very short supply nowadays, and a wonderfully creative look at growing up in a turbulent country. The animation is especially creative considering that most of it is in black and white. My main complaint is that it drags a bit in the second half.

Marjane is precocious and outspoken young Iranian girl who was nine years old during the Islamic Revolution when the fundamentalists first take power--forcing the veil on women and imprisoning thousands. She cleverly outsmarts the "social guardians" and discovers punk, ABBA and Iron Maiden, while living with the terror of government persecution and the Iran/Iraq war. Then Marjane's journey moves on to Austria where, as a teenager, her parents send her to school in fear for her safety and, she has to combat being equated with the religious fundamentalism and extremism she fled her country to escape. I remembered watching this movie years ago on a random film channel, and I watched it and overall I really liked it. I love the animation in this movie, it's so dark and so gritty at times. …

Bold Animation and a Story to Match

This is a fantastic film that once again proves my point that animation works as well for adults as it does children. This is a coming-of-age story mixed in with history, politics, war, religion and psychology. Yet despite the subject matter, the story never feels bogged down or preachy.

I'll admit that I'm not too keen on Iranian history. This film probably isn't meant to be a primer, either, but it does give some insight into the background of what happens during the Islamic Revolution. The stark black and white images actually bring a lot of life to the film. It's amazing how expressive it turns out to be. Troops marching in a cloud of smoke against a group of protesters, a night sky littered with bombs and anti-aircraft shells, a conversation with the Almighty and Karl Marx - …

This may be an animated film on the outside but donât let that fool you. This is a heavily political, self-aware, coming of age film that focuses on an inquisitive Iranian girl that turned into a strong Iranian woman. I have to admit that I didnât understand the politics because I donât know much about the history of Iran. So, it took me a while to get used to the background of the story. Things really started to pick up when the focus turns to the character; how she had to lose people she loved because of the Islamic Revolution, her immigration to western Europe, her experience with boys, and her eventual return to her home country. I thought this was a very insightful film but the drama wasnât heavy-handed. In fact, there were a lot of humorous scenes from time to time in order …

No posts have been made on this movie yet. Be the first to start talking about Persepolis!