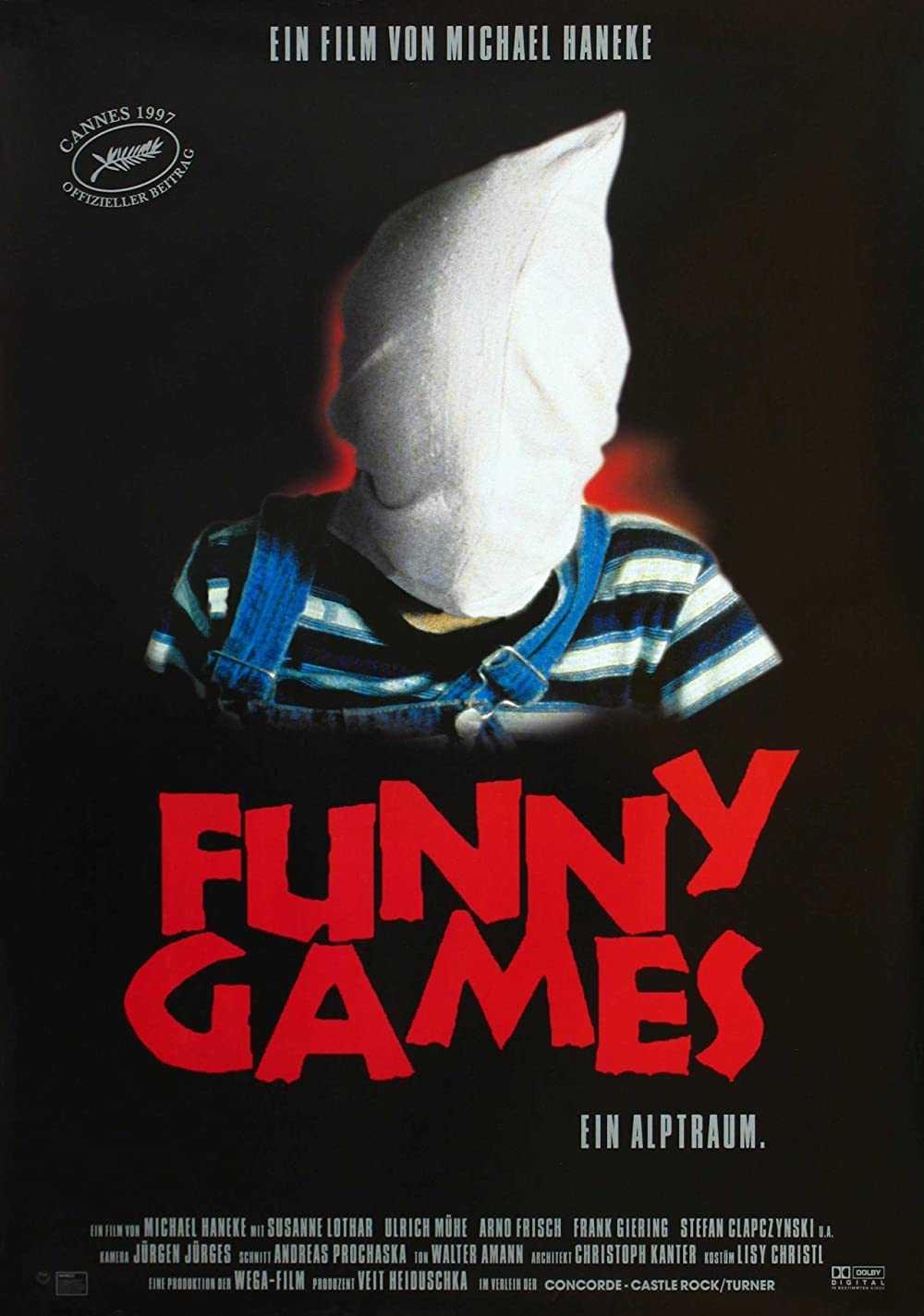 Plot: A family vacation is interrupted by two educated, articulate and sadistic young men who come up with some interesting games for the family to play. -- Chris Kavan

Really twisted. More people should be talking about "Funny Games."

After hearing so much about this movie I expected it to be REALLY good but I thought it was BORING & after falling asleep a couple times while trying to watch it, I gave up & shut it off

Funny Games is not funny at all. But it is brilliant. Two young men terrorize a family, without any of the Hollywood gloss and heroism we're so used to seeing. This. Is. Torture. Things don't go right for the family at all, and when it appears they have regained some control, its quickly taken away from the them. Its use of music is disturbing but it makes the atmosphere more palpable. Its a great great film but not one many will love and adore.

"We're not up to feature film length yet. You want a real ending with plausible plot development." A brutally shocking yet provocative and surprising crime flick that is definitely not for the faint of heart. Unsettling coupled with dark humor and gruesome horrific acts. It's starts of with a regular wealthy family namely Georg (Ulrich MÃ¼he), his wife Anna (Susanne Lothar), his son Georgie (Stefan Clapczynski). Peter (Frank Giering) and Paul (Arno Frisch) visit the family to ask for some eggs, and things eventually go wrong. The director utilizes effective suspense build-up and humor. The artists involved were cruel, sympathetic and realistic. In effect, the performances were authentic and believable. Excellent screenplay with lines such as "The wind blows where it wishes." "You …

Two psychotic young men take a mother, father, and son hostage in their vacation cabin and force them to play sadistic "games" with one another for their own amusement.

Funny Games is another one of those films everybody bare me has seen. Finally I found it in my supermarket this afternoon and just finished watching it. I have to admit that it toally blew me away. Funny Games is far more than a Horror, it's also a depiction of just how often Media violence is in our society and how much we take it for granted and almost let ourselved be entertained by this. Pure genuis!

The film opens up with a helicopter shot of the family arriving at their holiday home on the motorway. While watching this we are shown just how close the family, setting us up for one hell of a ride. This …

"Why are you doing this to us?"

Even though he can be--or rather, is--too preachy, I am a Haneke fan. This film, Cache, and The Seventh Continent are particularly brilliant at probing, in most unsettling ways, the self-created horrors of the bourgeoisie. Granted, he doesn't do so with the same verve or puckish wit as Bunuel, but on the other hand he does so with a tangible plot unlike Godard, so you take what you get I suppose. And technically he's one of the finest filmmakers working today--if he ever decided to just let her rip and make a Hitchcockian thriller, we'd be in store for a great film, no doubt. This film is truly painful to watch, with the sadistic games its villains/protagonists play with the family, and wittier (particularly in its self-reflexive moments) than one might expect.

No posts have been made on this movie yet. Be the first to start talking about Funny Games!