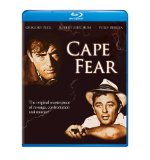 Plot: A sadistic ex-con tracks down a Southern lawyer, and wages a campaign of terror on him and his family. -- MaceeRae

A great suspenseful thriller for it's time. Still holds up thanks to some iconic scenes and Mitchum's terrifically scary villain. I may prefer the remake from a story standpoint, but this original is rock solid.

Robert Mitchum is so effectively chilling that goosebumps are evoked merely from our introductory glimpse at his Max Cady.

Amazing. Don't even try to see the remake. This has several really scary scenes.

A lawyer finds his family terrorized by a brutal woman hating sociopath who blames him for sending him to jail for 8 years. Gregory Peck was the perfect casting choice as the morally upstanding husband and father who finds he must question his principles when the law fails to protect them from such a wily and dangerous predator. But it is Mitchum on top form who steals the film and brings a real sense of underlying menace to his character; the scenes he shares with Peck crackle with tension. There's also some strong support from the ever reliable Martin Balsam and Telly Savalas (sporting a full head of hair!) and the family scenes are refreshingly syrup free. With a very memorable score and great showdown featuring a classic closing speech, this is far better than the …

No posts have been made on this movie yet. Be the first to start talking about Cape Fear!