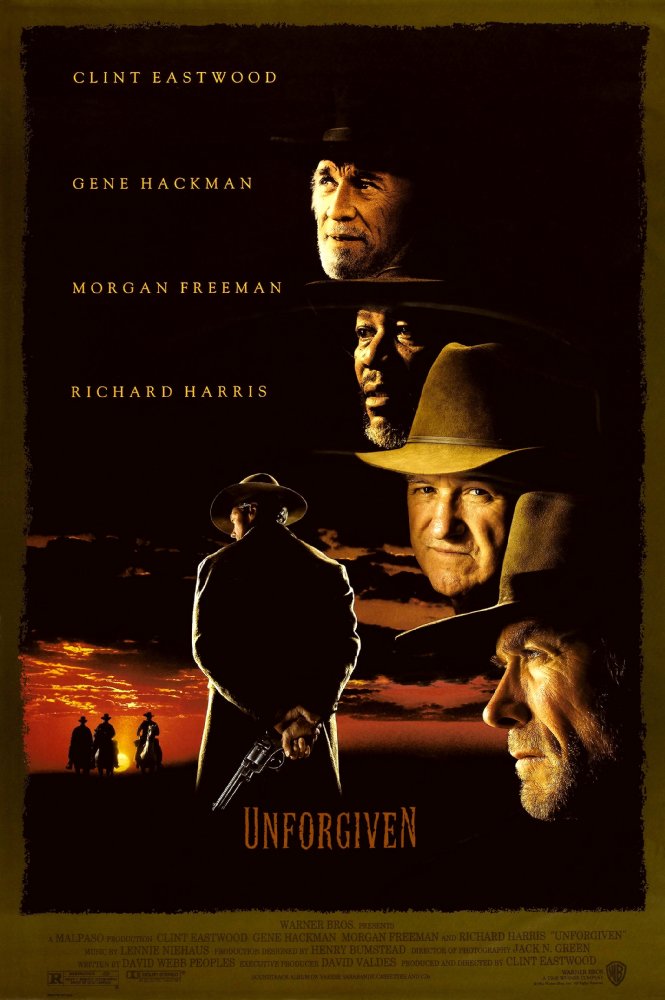 Plot: An old gunman rejects retirement for one last job as he enlists the help of his old partner, and someone new, who is much younger than him.

Clint Eastwood delivers a memorable western, this time not only from in front of the camera, but from the director's chair as well.

Eastwood directs and acts in one of his best movies of his career. Unforgiven brings back to remembrance the delightful qualities of a good western and juxtaposes dramatic tragedies and incidents with a smart perspective on antagonism. There are no good guys or bad guys. Sometimes, fire must be fought with fire. "Badass" Clint knows it, achieving a beautiful scope of nostalgia and a climatic bullet exchange, more disturbing psychologically than for its graphic violence. The western genre has been saved. 85/100

It ain't bad, but it ain't special either.

The movie was okay. It had many flaws, unlikable characters and boring scene after boring scene.
I understand what Clint Eastwood was trying to do. He chose a different route and made a less-than-action-packed Western.
I can't relate to the characters at all. We're supposed to sympathize with William Munney (especially in the last few scenes), but I can't bring myself to like him and want him to succeed, especially when he has such a cruel and unforgivable (haha, Unforgiv-able) past and character.
English Bob is an extremely useless character. He's only there so that Gene Hackman can shout a few insults at him, which lend no perspective or bring the story further.
Ned was fine, but again, I didn't sympathize with him or think …

An ex-gunslinger comes out of retirement to collect the bounty on a pair of cowpokes who disfigured a young prostitute. Clint Eastwood directs and stars in a deconstruction of the myth of the old west that examines the kind of man who would exist in a society which provides mean drunks and arrogant, prideful boys with lethal weapons. Saul Rubinek's author of the romanticized versions of the stories provides the eyes through which the myths are dispelled as Gene Hackman reveals the truth behind them. But even Little Bill, himself little more than a brutal thug with delusions of grandeur, revels in his own exploits and it is only Eastwood's reformed killer who shows any shame or wish for redemption for his past actions. In the hostile environment of the American west it is not the most …

No posts have been made on this movie yet. Be the first to start talking about Unforgiven!