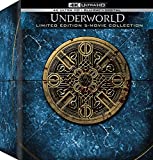 Plot: Working together to expose the truth about their bloodlines, vampire warrior Selene and werewolf hybrid Michael learn the backstory to the ongoing conflict between the patrician Death Dealers and the barbarous Lycans.

An underrated follow up to the quite good Underworld franchise based of the World of Darkness and the Kindred series. All the key elements are here. It plays like a chase/survival film with the protagonists always on the run from an unstoppable evil. The action is very well done and the acting is great.

Working together to expose the truth about their bloodlines, vampire warrior Selene and werewolf hybrid Michael learn the back story to the ongoing conflict between the patrician Death Dealers and the barbarous Lycans. This movie was gory fun that not a lot of people liked this movie and I don't know why ? .

The story revolves around Selene (Kate Beckinsale), three vampire elders (Markus, Viktor, and Amelia), William Corvinus (Brian Steele) and Michael (Scott Speedman). Plot and storytelling was confusing while the film overall overlong because of the action. Flashback was somewhat overdone which adds to the chaos. Special effects and fight scenes were good. Beckinsale gives a more sincere performane here. Underworld: Evolution has its moments, overall it was just alright.

Carrying on directly from the first film, Beckinsale and Speedman are on the run from the first vampire, a virtually unkillable uber-vamp who wants to unleash his twin brother and uber-wolf on the world. Let's face it, the plot to this film is all a bit irrelevant really. It's all about flashy visuals and non-stop action to the point it resembles an albeit super-cool videogame. There's so much eye candy it made my teeth hurt (not the least of which is Ms Beckinsale herself of course) and the action is pretty much non-stop to the point where characters were introduced and immediately killed off again once they'd served their purpose. But I did like it's unpretentious, no-nonsense approach that lacked the self absorbed pomposity that ruined the first film and the action is far more …

I dislike movies where as an audience member I spend more thought on the story than the writers, closer attention to the dialogue than the actors, and a keener eye on storytelling than the director. Underworld Evolution is just such a movie.

The movie starts out with a long and complicated backstory about the first vampire and werewolf. If by the time itâs over, if you are still awake, the film then jumps right back into the scene where the first Underworld ended. Selene (Kate Beckinsale) and Michael (Scott Speedman) go on the run from their enemies, and the enemies of their enemies for some reason not explained (explanation isnât this series strong suit), and find a human who has lived for centuries (because heâs Dick Clark?) and more insanity that will actually make your …

No posts have been made on this movie yet. Be the first to start talking about Underworld: Evolution!