Spirited Away ( Sen to Chihiro no kamikakushi ) Movie Information 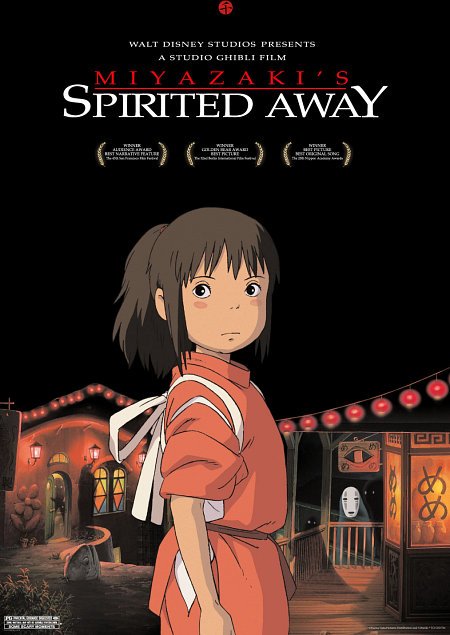 Plot: A young girl is whisked away to a world of witches, dragons, gods and spirits when her parents stop at a seemingly abandoned amusement park. When her parents are transformed into pigs, it's up to Chihiro to make new friends and believe in herself in order to find the way back to her own world.

One of the deepest, darkest, yet magical animated films ever made. It's an instant classic with memorable characters and a powerful message.

I feel 'Spirited Away' was overhyped for me. I didn't see much present to hold this so high above the other Studio Ghibli films. I very much appreciated the creative/beautiful visuals, child wonder, and unconventional elements. These aspects are expected of all Studio Ghibli's work. It's just more of the same. I didn't connect with the story or characters here. A well done movie, in most regard. I got more out of 'Kiki's Delivery Service'.

The animation is great as usual in Hayao Miyazaki's films but this overrated pos has nothing else going for it. I get it. It's a "delightful" blend of Wizard of Oz, It's a Wonderful Life, and Alice in Wonderland. Whatever.

"Spirited Away" by Yojimbo

A young girl is transported to a magical kingdom populated with dragons, spirits and monsters where she must break the spell of its witch-like ruler to rescue her parents and return home. Studio Ghibli's answer to The Wizard Of Oz, Spirited Away is another beautifully crafted fantasy that will enchant children and adults alike. It contains Miyazaki's usual menagerie of strange and wonderful creatures who help and hinder a lost girl in a kind of Japanese homage to Alice In Wonderland. Bizarre and endearing in a way that's peculiar to the Japanese, this film is so beautifully drawn, animated and scored it's difficult to not be drawn into this magical world despite some rather obtuse plotting that may confound younger viewers. Strange and beautiful.

The film is similar to Alice in Wonderland, Cinderella and Pinocchio, anime style with brilliant symbolisms. A girl named Chihiro Ogino works in Yubaba's bathhouse to make things right. Haku brings Chihiro to the bathhouse where he tells her to see Kamaji, a six-armed man who works the boiler room. The multi-awarded and the highest grossing Japanese film had themes of maturity, confidence in taking up new challenges, purity, rude people, gluttony, avarice, love and friendship. The voice acting, score and visuals were amazing. Only qualms this reviewer had was the pace compared to Princess Mononoke and how easily the challenges were overcome. Nevertheless, Spirited Away is a great film to view especially those who are transferring to a new location and have trepidations about how …

With SPIRITED AWAY, Hayao Miyazaki made a major breakthrough not in just Japan, but in many other countries around the world. In fact, it acquired the Academy Award for Best Animated Feature in 2002. Consequently, Disney has since released Miyazaki's output on DVD. However, while SPIRITED AWAY is an absolutely amazing animated feature worthy of five-star status, I wouldn't say it's Miyazaki's greatest feature ever. This surrealistic yet engaging story of a young girl struggling to free her parents from the curse of a greedy enchantress sometimes gets more hype than it deserves; it almost feels as if Ghibli's other works are compared unfavorably to this film. My personal gripe aside, SPIRITED AWAY is worth watching for its mesmerizing visuals and subtle, yet strong messages about …

No posts have been made on this movie yet. Be the first to start talking about Spirited Away ( Sen to Chihiro no kamikakushi )!