It ain't bad, but it ain't special either.

The movie was okay. It had many flaws, unlikable characters and boring scene after boring scene.
I understand what Clint Eastwood was trying to do. He chose a different route and made a less-than-action-packed Western.
I can't relate to the characters at all. We're supposed to sympathize with William Munney (especially in the last few scenes), but I can't bring myself to like him and want him to succeed, especially when he has such a cruel and unforgivable (haha, Unforgiv-able) past and character.
English Bob is an extremely useless character. He's only there so that Gene Hackman can shout a few insults at him, which lend no perspective or bring the story further.
Ned was fine, but again, I didn't sympathize with him or think …

An ex-gunslinger comes out of retirement to collect the bounty on a pair of cowpokes who disfigured a young prostitute. Clint Eastwood directs and stars in a deconstruction of the myth of the old west that examines the kind of man who would exist in a society which provides mean drunks and arrogant, prideful boys with lethal weapons. Saul Rubinek's author of the romanticized versions of the stories provides the eyes through which the myths are dispelled as Gene Hackman reveals the truth behind them. But even Little Bill, himself little more than a brutal thug with delusions of grandeur, revels in his own exploits and it is only Eastwood's reformed killer who shows any shame or wish for redemption for his past actions. In the hostile environment of the American west it is not the most …

Unforgiven is more than a Western

Unforgiven is more than an action packed Western. The fist fight, gunplay and adversarial confrontation, were the best acting of Clint Eastwood and Gene Hackman. Plus, the movie delved into friendship, honor, and justice from the point of view of a wild killer who had become a peace loving farmer. Out of honor, this peaceful farmer with two children was drawn back into his former life, to right the wrong against a woman denied justice just because she was a prostitute. The man of honor could not accept that. Justice was incumbent upon him. When his only friend died at the hand of the ruthless sheriff, the former outlaw lost all restraint. With methodical precision he confronted a saloon full of hard, tough men and blasted them to pieces. When the gunsmoke cleared, the guilty had fallen … 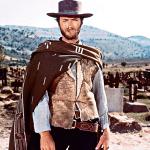 Unforgiven is probably the best movie directed by Clint Eastwood. Unforgiven showed the more gritty side of the frontier and didn't really glorify outlaws the way some of the older westerns did. Clint Eastwood gives an Academy Award nominated performance as William Munny, a retired outlaw who goes to Wyoming to kill two cowboys who cut up a prostitute since he is short on money. He used to be ruthless before he got married, but now his wife is dead and his farm is contaminated with a flu. Morgan Freeman co stars as his partner, and Gene Hackman gives a performance worthy of the Oscar he received as Little Bill, a man who used to be an outlaw but is now sheriff of the town in Wyoming. This is probably the last great western (although the remake of 3:10 to Yuma was pretty good), so check …

A Western Masterpiece directed by and starring the "old" yet dynamic Clint Eastwood. This film is about a one time "hired" killer , long since reformed and raising 2 sons by himself, who comes out of retirement to make one more hit because his family needs the money. He illicits the help of a old friend played by Morgan Freeman and encounters a ruthless and no-nonsense sherrif played by Gene Hackman. The movie is a powerful examination of morality and hypocracy in the old west and the impact of killing and being killed. Outstanding performance by Hackman earned him an Acadamy Award. Other Acadamy Awards earned by this movie were Best Picture and Best Director. Exciting from start to finsh, this masterpiece lands at #12 on my Top Movie List... Enjoy!!!

William Munny (Clint Eastwood) and Ned Logan (Morgan Freeman) used to be killing machine in the Old West, but had since settled down. But when a kid (Jaimz Woolvett) comes to Munny, asking for help on a murderous job, the two decide to come out retirement. They each realize their true selves in the Best Picture winning film, "Unforgiven."

You've gotta admire Clint Eastwood. He'll continue directing movies 'til the end of time without ever improving his own acting. He seems to have the ability to get a great performance out of everybody in his movies except himself. He obviously doesn't realize this because he keeps starring in them.

The cinematography in "Unforgiven" is truly beautiful, showing off the landscapes of the open range in a new way. The music is, at best, lacking. There …