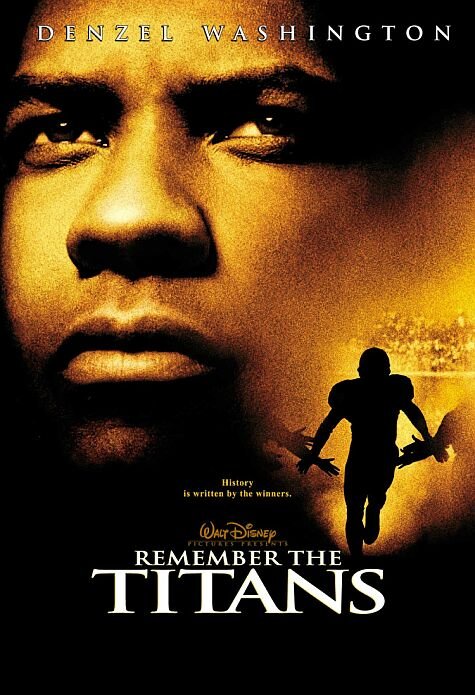 Plot: Two suburban Virginia high schools are integrated, and the new African American puts his job on the line to bring the team together.

Anything Denzel Washington does seems to be pretty god, and this is no exception. It is a good storythat not many people think of when it comes to the topic of integration. Sports integration changed the face of sports forever so it is a topic I am very interested in. The movie did a fair job of painting us a picture of what the team went through during integration. This is a MUST watch.

Remember the Titans avoid the typical cheesy sports cliches by injecting its plot with some genuine heart, mostly care of a commanding performance by Denzel Washington. Unsuspectedly sneaks up on you by the conclusion.

One of the few 'based on a true story' sports movies that I actually somewhat enjoy. It gets smaltzy and predictable, but the characters shine in spots and it becomes very easy to root for the team.

This deep and entertaining movie comes in at #15.

Remember the Titans is an American sports drama, based on a true story, that stars Denzel Washington as Coach Herman Boone. The film centers on the football team of the newly integrated T. C. Williams High School in Alexandria, Virginia. The film takes place in 1971 when Herman Boone (Denzel Washington), is hired as head coach for the school's football team, taking the place of former head coach Bill Yoast (Will Patton). Yoast at first refuses Boone's offer as the assistant head coach, but then changes his mind. The black and white members of the football team clash in racially-motivated conflicts on a few occasions throughout their time at football camp, but after team building efforts by Coach Boone, the team manages to achieve some form of unity, as well as success. The main conflict …

No posts have been made on this movie yet. Be the first to start talking about Remember the Titans!