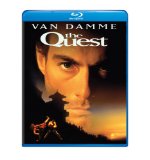 Plot: A man taken and sold and trained as warrior finds himself on a globe-trotting adventure culminating in the Ghang-gheng where martial artists from all over the world take part in a winner-takes-all competition for the coveted Golden Dragon. -- Chris Kavan

A somewhat fun adventure that has Van Damme fighting in a classic styled tournament. The story is a cliched one, but I still kind of liked it. Another guilty pleasure of mine, from Van Damme's collection.

Worst All Time by Jupilerke

Best of Van Damme by Ikkinbot

No posts have been made on this movie yet. Be the first to start talking about The Quest!