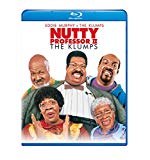 So forgettable that I've met people who didn't even know that "The Nutty Professor" even had a sequel.

Sherman Klump (Eddie Murphy) creates a formula that makes one youthful again. He proposes to Denise Gaines (Janet Jackson) and accepts. After extracting Buddy's DNA and accidentally mixed with Buster's strand, Buddy Love tries to ruin Sherman and get the accolades. The Dean (Miller) sees potential in the formula and notifies the largest pharmaceutical company. It seems the script was well written though it had a few obscene dialogues that doesn't seem fitting for a PG-13. The effects were really utilized to the sight of disbelief. A descent sequel, Nutty Professor: The Klumps doesn't live-up to its predecessor.

Almost as good as the first. It goes for the low brow humor too much at times, but still funny.

No posts have been made on this movie yet. Be the first to start talking about Nutty Professor II: The Klumps!