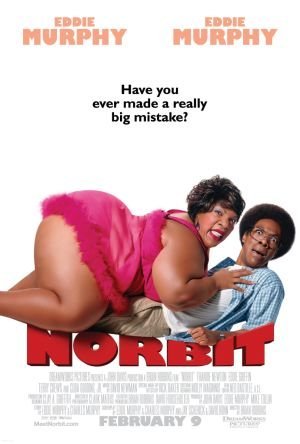 Plot: A mild-mannered guy who is engaged to a monstrous woman meets the woman of his dreams, and schemes to find a way to be with her.

This is how Eddie Murphy lost his Oscar.

I feel like if this movie had come out about the time The Nutty Professor came out it would have done better. The makeup they did for the the various Eddie Murphy characters was good and very realistic. That was the only positive in the movie though. I had a hard time identifying with any of the characters and in all honesty found Norbit annoying. The only more annoying character was Rasputia. It makes me sad the Cuba Gooding Jr. was in this and it makes me really sad that Eddie Murphy feels like he has to go back to his old ways to re-make his career instead of moving forward as an actor.

Eddie Murphy plays dress up again and this time it's not very funny.

Eddie Murphy has hit rock bottom with this one!

Seems Eddie Murphy has hit bottom (in more ways than one) with this movie. I was surprised at the low caliber of this feeble attempt at humor. Despite Eddie Murphy's comic prowess it remains a sad story with sad characters and few, if any, redeeming qualities. In fact, his characterization of a fat woman made it perfectly obvious that Eddie is very prejudice and to emphasize the point, the anorexic appearing Thandie Newton was cast to be the exclamation point after the word 'Fat!'. As for the character, Norbit, I have to ask... How Stupid / Desperate Can One Person BE? Until this movie, I believed the slow decline I've seen in Eddies last few movies was temporary. However, this movie made it painfully clear he's lost it and/or is desperate. After all, only a desperate person would …

Norbit should be sent into orbit

Norbit (Eddie Murphy) is a mild-mannered, bespectacled geek, raised in an orphanage by elderly Mr. Wong (also Murphy) after he was thrown out of a moving vehicle onto its doorstep). Later in life, Norbit finds himself trapped in a marriage with the irredeemable Rasputia (again Eddie Murphy, in a 400 lb. Fat suit) and working as an accountant for her three hulking brothers, The Latimers, who exist only to intimidate the local businesses with threats and violence. One day, Kate Thomas (Thandie Newton) arrives to awaken Norbitâs childhood passion for her; they were best friends in the orphanage together, and as the movie makes clear, they even pooped together. Unfortunately, she is about to marry the greedy, obviously dubious Deion (Cuba Gooding Jr.) who has joined the Latimer brothers in …

Worst All Time by Cassie

No posts have been made on this movie yet. Be the first to start talking about Norbit!