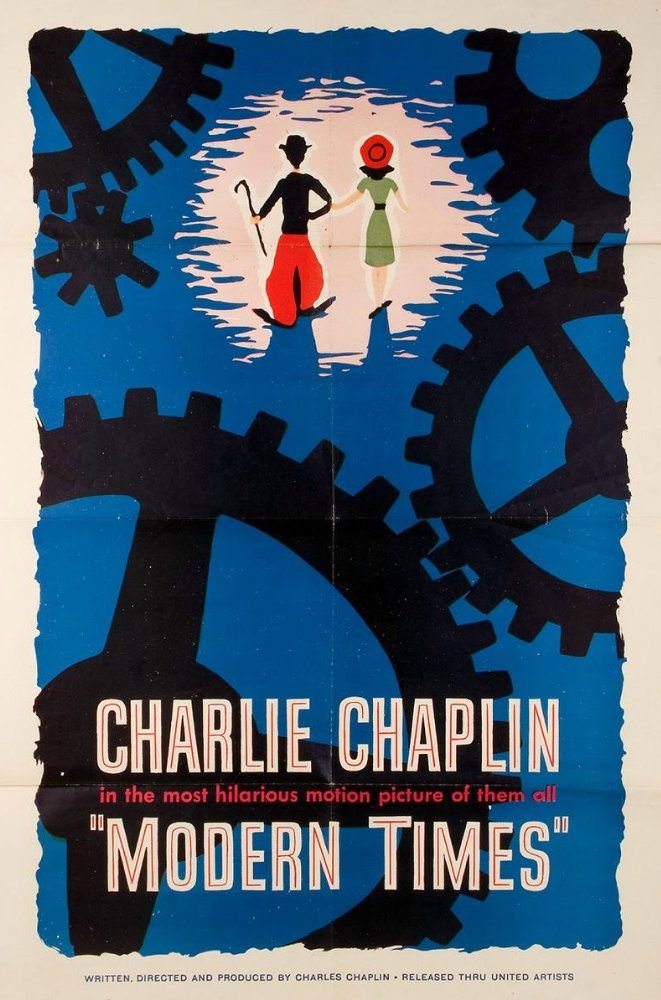 Plot: A man who struggles with life is struggling to get along in the industrial society. He finds help when he meets a homeless woman.

"Modern Times," Charlie Chaplin's relevant satire of the Depression era, is both funny and powerful.

In the strictest of terms, Modern Times is a satirical masterpiece of industrialization and the exploitation of labor force; in subjective terms, Modern Times is a celebration of life in irreversible, harsh times. There's one term that made Chaplin's scope incomparable and influential: innocence. A character walking through the confines of the world and its different faces (neoralist streets in The Kid [1921], a snowy mountain and local pubs in The Gold Rush [1925], a city that never sleeps in City Lights [1931], the Second World War in The Great Dictator [1940]...) with complete naivetÃ© was a wonderful concept worth of worldwide nostalgia. Tati is very thankful. 99/100

fantastic all the way through. a new all-time favorite. chaplin and goddard are wonderful. second favorite scene: when the worker sings and dances at the nightclub. my favorite scene: easy, the ending and what an ending,if it doesn't make you even a little weepy, you ain't human..........

I can't start any review without going all cuties on something, but today that's changed. This is one of the most beautiful and adorable things my eyes have ever laid eyes on. It leaves a warm feeling inside that can make anyones day. The personalty, charm, and a sense of innocence with are main characters.

With 'non-sense song' probably being the greatest pieces of gibberish to film. If you watch that the scene on repeat and watch his hand gestures, you get a story. That's just awe-inspiring.

Chaplin way of presenting slapstick comedy as an artistic form is something that's never been done before at the time and never again. Well, the way he did it. While known for being a perfection of his work, as every single frame is so brilliantly stage for either a joke or …

Top Films of 1936 by Neobowler

Top of the top by buxter

No posts have been made on this movie yet. Be the first to start talking about Modern Times!