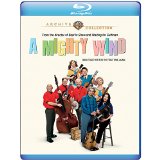 Plot: Charming mockumentary about folk music featuring many of the usual suspects from "Waiting For Guffman", "Best In Show", and "For Your Consideration".

I didn't find this one to be as funny as Guest's other mocumentary style films, but it makes up for it with some great musical performances.

The Brilliance of Guest

It is hard to rank the three Christopher Guest helmed mockumentaries individually; they are a triology-they must be viewed together to appreciate their full brilliance. Comedically, they really paved the way for The Office. After much thought, I declare Mighty Wind the best, because it really builds to a rallying conclusion, capturing your heart in the process. It is Eugene Levy's finest hour. But Waiting for Guffman is the funniest. Corky St. Clair is one of the most brilliant creations of all time. Hilarious lampooning of local theater. To say Best in Show is the weakest of the bunch would be a terrible insult. It too earns an honor, for the funniest single lines. This is the movie that made me laugh out loud the most, especially Michael Hitchcock (who I think is the most underrated of …

Top 25 Films of 2003 by CarnivorousCouch

No posts have been made on this movie yet. Be the first to start talking about A Mighty Wind!