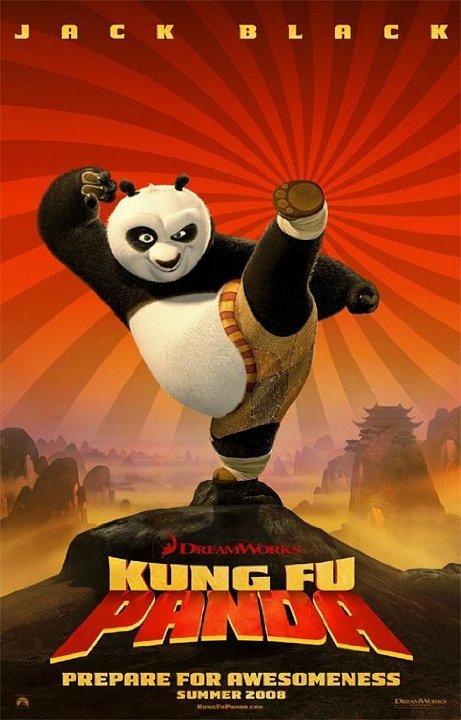 Plot: A young-ish panda is one of the laziest animals in the area (called the valley of peace). After a long selection process he becomes the one panda that must protect their home land from all the enemies. The sad thing is that Po doesn't really know much protection action and must learn it on the fly.

Touching and funny, as well as a charming animated take on the martial arts genre of film.

This movie is about a young-ish panda is one of the laziest animals in the area (called the valley of peace). After a long selection process he becomes the one panda that must protect their home land from all the enemies. The sad thing is that Po doesn't really know much protection action and must learn it on the fly. This movie has the most awesome fighting scenes of 2008 and the animation is so good in this movie.

O man do I hate Jack Black. But this movie is great. I can handle him as a voice actor I guess because I found this children's movie loveable and funny.

A clumsy and gluttonous panda is revealed to be the chosen one to become the Dragon Warrior and defeat the evil former student of his master. Kung Fu Panda pretty much does what it says on the tin. It's exactly the kind of Americanized version of Eastern culture I was expecting, including the Karate Kid format, usual fortune cookie philosophy and pseudo-martial arts, right through to the slightly embarrassing use of Carl Douglas' Kung Fu Fighting for the credits. It is a very technically accomplished film however, with animation of a very high standard and some very, very pretty use of imagery. Jack Black also managed to dial himself down a notch so even those who find him terminally irritating should be able to swallow him for 90 minutes and it's all very difficult to dislike. I'm sure …

Kung Fu Panda is both a send-up of and a tribute to the kung-fu genre, and it works. Innocent eyes will goggle at the beautifully rendered characters, break-neck action, and gentle humor; more experienced viewers will laugh at loud at all of the kung fu movie clichÃ©s... a hopeless loser that goes from zero to hero in about one day of intense training... a promising but evil student who turns against his master... the wise, ancient master... the prophesy... the various forms of animal-style kung-fu practiced by actual creatures of the correct type... it's all there, without any wires, and without the awful dialogue you would expect from a chop-sockey film. Jack Black entertains, and shares some excellent dialogue with Master Sifu, voiced by Dustin Hoffman. The Furious Five, a group of …

My friends did not really want to watch this animated flick but I forced them anyway because it got great reviews. As the movie went on, I heard them laughing their butts off and by the end of the film, they even clapped because they enjoyed it so much. This movie is definitely for kids but that does not mean that it does not have anything to offer for adults. Thereâs no fart jokes hereâwhich is pretty darn great. Instead, there are references to other kung fu movies, bona fide sense of humour that doesnât insult oneâs intelligence, intense action sequences that doesnât involve blood and limb-severing, and thoughtful life lessons. The all-star voice talent actually enchanced the film instead of making it distracting. As for the animation, it rivals those of Pixarâs best. I …

No posts have been made on this movie yet. Be the first to start talking about Kung Fu Panda!