Joe Versus the Volcano Movie Information 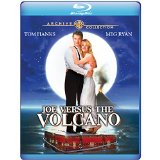 Strange vehicle for Tom Hanks and Meg Ryan, two very likable actors who were wildly miscast. Confusing storytelling against a surrealist set design could had been more interesting. Except it feels like a Tim Burton knockoff.

Don't be put off by the presence of Tom Hanks and Meg Ryan; this is their least nauseating effort with some nice production design in a similar vein to Brazil (from the same designer as Edward Scissorhands) and an interesting off-beat script.

No posts have been made on this movie yet. Be the first to start talking about Joe Versus the Volcano!