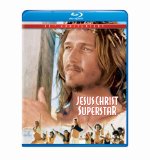 Plot: A rock opera based on the last six days in the life of Jesus Christ as told through the eyes of Judas Iscariot. -- Chris Kavan

A musical is really based on three things the look, the music and the singing. The stories are usually thin but this one really has a better story since it was already all written out for the writers. The look is good enough I do like all the Israel scenery. The signing is good especially from Carl Anderson and the music is great. Some might fine this offensive but I don't and I am a very faithful person. The cause of the controversy really is from a miss interpretation.

A rock opera based on the last six days in the life of Christ is pretty risky, but the music works, even if its anachronistic. It's has a hippie vibe going on that makes it both more authentic and yet spoils it at the same time.

No posts have been made on this movie yet. Be the first to start talking about Jesus Christ Superstar!