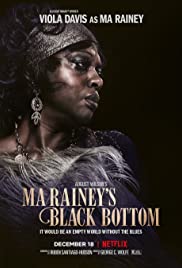 Plot: Chicago, 1927, arriving late, the trailblazing, legendary "Mother of the Blues", Ma Rainey, finds herself in a battle of wills against her white manager and producer over the control of her music. Meanwhile, in the claustrophobic rehearsal room another drama plays out as ambitious trumpeter Levee, who has his own ideas for the music industry, engages with his fellow musicians - spurring them on to reveal secret stories that will alter their lives forever. -- Chris Kavan

Although it clocks at only 90 minutes, MA RAINEY'S BLACK BOTTOM packs in a lot of drama with powerhouse acting from Viola Davis and the dearly departed Chadwick Boseman.

"Ma Rainey's Black Bottom" is two movies for the price of one. A tribute to the titular blues legend and a poignant vessel filled with timeless racial themes, this instant classic of an August Wilson production features Viola Davis and the late Chadwick Boseman in impeccable form.

"Why did you step on my shoe?"

'Ma Rainey's Black Bottom' is beautifully written character study that is glued together by fantastic music and costumes. The movie is an hour and 34 minutes long, yet leaves no room for filler, only the nitty-gritty of things.

Based on a stage play by August Wilson, the movie is structured and staged almost like a theatrical production, remarkably like 'Fences', another August Wilson adaptation. I think all of Wilson's film adaptations should approach this kind of style, because it helps make his work stand out from the other movie adaptations in a unique way.

Viola Davis is terrific as "Mother of the Blues," Ma Rainey. Me calling her amazing isn't anything new, because when has Davis ever given a mediocre performance.

Chadwick Boseman....wow. Not since Peter Finch in 'Network' …

No posts have been made on this movie yet. Be the first to start talking about Ma Rainey's Black Bottom!