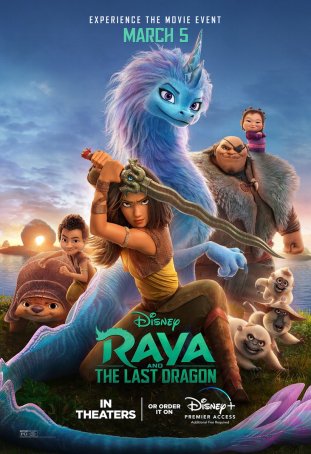 Plot: In the land of Lumandra, a place like Earth but far removed, an ancient civilization has thrived. A warrior named Raya is determined to track down the last dragon, Sisu after an ancient evil returns. -- Chris Kavan

Beautifully animated and action packed. Its message is a tad familiar but itâs undeniably heartwarming. The scale lends an epic feel to the action scenes and the world looks creative in its design. The castâs voicework is mostly good, particularly Kelly Marie Tran and Gemma Chan. Awkwafina is not bad necessarily but her jokes didnât always land. Raya also benefits from a fast pace, free from bloat. This is what the live-action remake of Mulan should have been like.

While Raya and the Last Dragon follows a typical &quot;heroes journey&quot; that is prevalent in any number of other films, I really was impressed by where the film is set and the characters that inhabit this world. And while you'll find many a review stating their disdain for Awkwafina's role as the titular last dragon, I thought all the vocal talent was spot on - and, as others have also stated, she reminded me a bit of the genie from Aladdin. Sure, the film doesn't break any new ground, but it's still a wonder to view and proves you don't need songs to leave a lasting impact.

The lessons in trust and fellowship give "Raya and the Last Dragon" more dimension than most recent Disney properties, even if it clings to many of the well-worn tropes we've come to associate with the animation figurehead.

No posts have been made on this movie yet. Be the first to start talking about Raya and the Last Dragon!