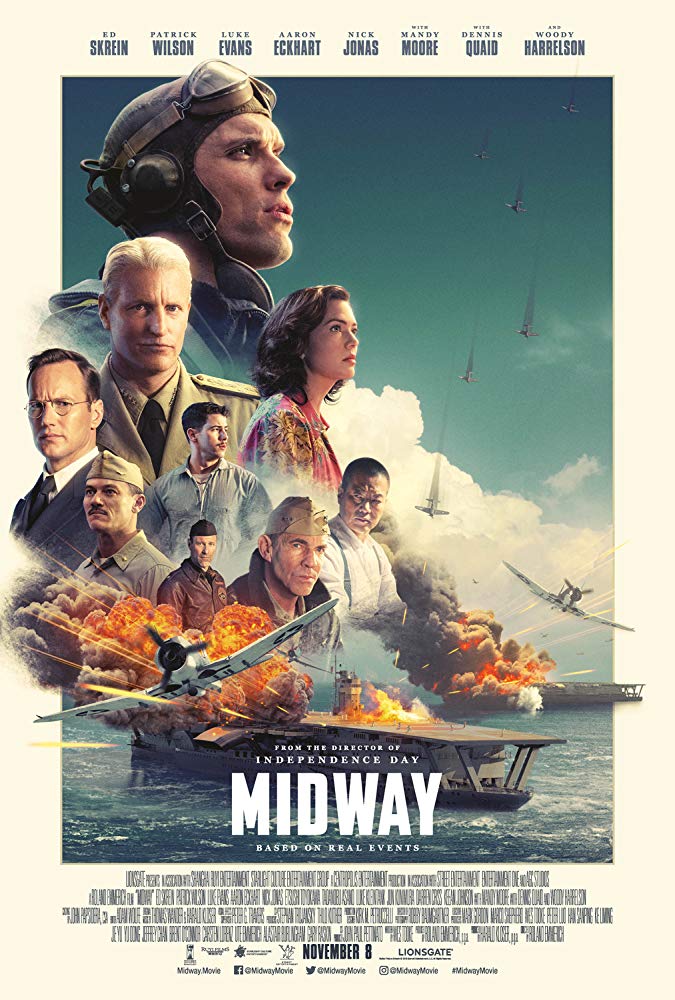 Plot: Following the attack on Pearl Harbor, the United States officially entered WWII. The Battle of Midway, between the U.S. Navy and Japanese Imperial fleet was one of the most pivotal battles of the War in the Pacific and is recounted through the eyes and accounts of the leaders and sailors who experienced it first hand. -- Chris Kavan

Roland Emmerich recreates the Battle of Midway in this updated war epic. World War 2 enthusiasts will enjoy the dogfights and battle scenes. The big cast do a decent job with their respective roles but few leave a memorable impact. Perhaps the standout is Ed Skrein who plays real life war hero Dick Best. Skrein plays it like a self assured matinee idol from the 1940s, but at least his character has a personality. Dennis Quaid and Woody Harrelson round out the cast as the seasoned officers. Harrelson's fake Nimitz hair looks absolutely absurd.
Although the action scenes are reasonably well done, the visual effects don't look as polished as they did in Michael Bay's Pearl Harbor. Don't worry, this is a better movie than Pearl Harbor but that movie has way better CGI.
The film has …

I know when I think of Roland Emmerich, I think of big, bombastic world-ending, special-effects laden films. Explosions. Aliens. Climate change. And, yes, Emmerich has done war before - but I'm not going to lie, I was not a fan of The Patriot. Thus, going into Midway, I was expecting something along the lines of Pearl Harbor (great effects, weak story) as opposed to, say, Saving Private Ryan (great effects, better story). Yet Midway managed to exceed my expectations - it still has Emmerich's flair for style, but still has plenty of substance to go along with it.

Much of this is due to some good casting. Ed Skrein is a standout as Dick Best - who starts out as a cocky pilot but evolves into a much more compelling character, especially as he is given more responsibility as the cost of …

No posts have been made on this movie yet. Be the first to start talking about Midway!