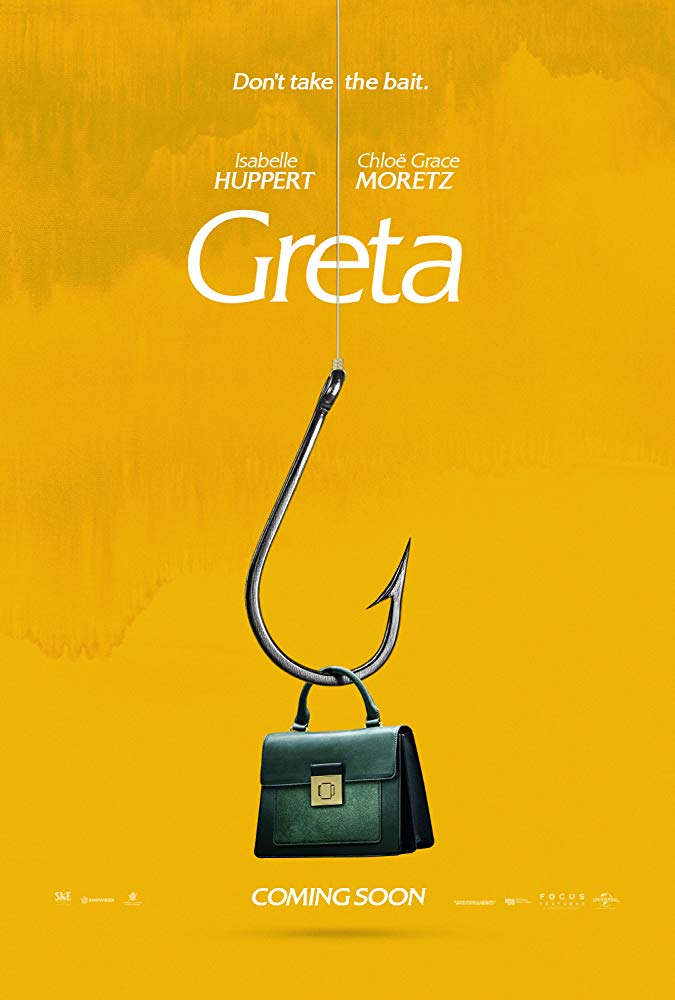 Plot: Frances is a young woman trying to to make it on her own in New York, perhaps a bit too innocent and naive for the big city. But when she returns a handbag she finds on the subway, she finds a new friend in the lonely Greta, a somewhat eccentric and lonely French piano teacher. As Greta and Frances become closer, however, Frances discovers more of the same handbag and realizes that Greta is not who she appears to be and as the facade falls away, madness intervenes. -- Chris Kavan

If you can suspend your disbelief, Greta will probably provide enough thrills, but even if you dig just a little deep, you'll realize just how utterly unrealistic is all is. I do like Isabelle Huppert as a different kind of antagonist - I just wish she was given a better film to become truly twisted. It's not too hard to predict where things are going and poor Stephen Rea is wasted in his brief role. Skip unless you're truly out of options and need some cheap thrills.

Neil Jordan's psychological thriller about a young woman (Moretz) encountering an obsessive stalker (Huppert) has a very thin premise. But it milks it for all it's worth. Isabelle Huppert is very good as the title villain and she's having a lot of fun playing a role that almost certainly would had been played by Bette Davis back in the 1960s.

A big stretch! We all know what Greta is capable of or what a psycho-stalker would do but the film just ends up feeding the audience the same. I find the shift of getting-rid-of-Greta to saving-Frances a bit unsettling, this way, the script led to a different path losing that one clear direction of the film. It could have gone deeper rather than broader, it has the mother-child layer of the story or the father issue dimension, but it chose to close it ***SPOILER ALERT*** with the best friend being the hero. Although I appreciate the attempt of the writer to make the story as visual as possible, the story development consequently hinged to unrealistic turn of events when: an investigator (hired by a very rich person) easily downed by a stalker and the party-and-yoga girl finishing the …

I have been in this well of loneliness, this black hole.
Maybe it drove me a little mad.
We were meant for love, Frances,
not this terrible isolation.

If you see the film âGretaâ pass by on your favorite streaming platform or on some VOD network service, itâs certainly not a bad choice to fill up an hour and a half of your spare time. The film itself is certainly not groundbreaking or breathtakingly innovative. This Hitchcock-like thriller provides temporary entertainment. And the only thing youâll remember of it is the acting. Unfortunately, an important clue is given away very early at the beginning of the film, making it extremely clear which direction itâs going to go.

Let me get straight to the point. Isabelle Huppert is simply fantastic as Greta. A …

No posts have been made on this movie yet. Be the first to start talking about Greta!